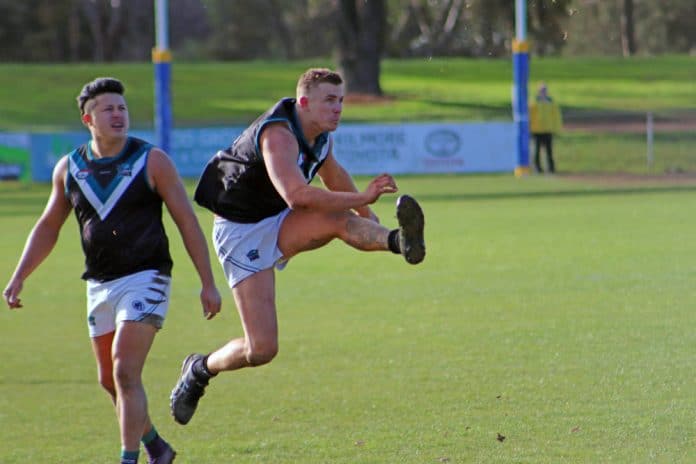 LAURIMAR remain undefeated in division three of the NFNL after their 12th consecutive win, toppling Kilmore by 35 points at JJ Clancy Reserve on Saturday.

The Blues got the jump on the Power in the first term, with three unanswered goals to Ben Cooney, Shane Skidmore and Chris Ryall, to lead by 20 points at quarter time.

Laurimar replied in-kind in the second term, kicking four goals to none to lead by 10 points at half-time.

A power outage just before half time meant no clock or scores for the entire second half, causing some problems on the field.

The Power came out for the second half with the same energy they finished the first with, kicking the first two goals of the third quarter.

Kilmore responded quickly with Chris Ryall squeezing the ball out of the pack for his second goal of the day.

Jaxson Kinnear kicked a vital goal for the Blues at the 23-minute mark to bring the margin back to 11 before Ethan Frawley ran into an open goal less than a minute later to push the margin back out to 16 at three-quarter time.

Justin Sherman opened scoring in the final term, running into an open goal after Laurimar rebounded almost instantly after a Kilmore behind.

Two goals to Laurimar forward Dallas King sealed the win for the Power.

Laurimar remain on top of the ladder while Kilmore are still third but now a game behind Panton Hill.

Laurimar have another test next week when they take on 6-6 Heidelberg West while the Blues take on 6-5 South Morang.