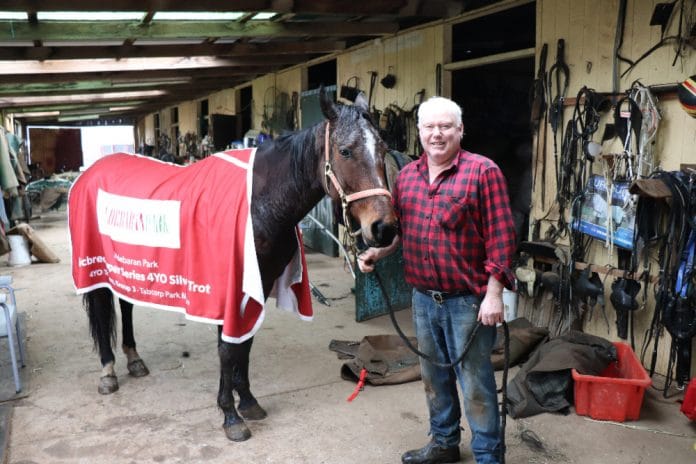 Kilmore harness trainer Bill Milner took out the biggest race of his career when his four-year-old gelding Dellsun took out the Aldebaran Park Vicbred Super Series 4YO Silver Trot at Tabcorp Park in Melton on Friday, July 5.

Mr Milner has been breeding and training horses for harness racing for 20 years while working as a farrier for Racing Victoria and the Kilmore Racing Club for 45 years.

Mr Milner said the $25,000 race was the biggest win of his career but they nearly didn’t race.

“I was talking to my mate five minutes before acceptance and he said I should go in it so I rang up and they let me in,” he said.

“I thought he’d win because he went well the week before. Chris Alford drove him and he goes good for Chris. He normally goes forward on him but this time he took a sit and went back and flew down the outside and we won.”

“I worked for Vinny Knight for 25 years shoeing his horses when he was the leading trainer in Australia. You learn a little bit from everyone and it helped me with my training,” Mr Milner said.

Mr Milner is with his horses every step of the way, from the time they’re foaled and all through their racing career, training them at his property in the shadows of Kilmore racecourse with a 400m track around his house.

“It makes it a bit more special because you’re beating people who have money and are paying big dollars for horses and these are all homebred horses,” Mr Milner said.

“I’ve had my share of winners, I don’t win a lot of races but I’m just a country trainer. I don’t train for people, I tried that but it’s too hard. I just do it to give me something to do. It’s a good hobby.”