Home News Community Time for a new clock in Kilmore 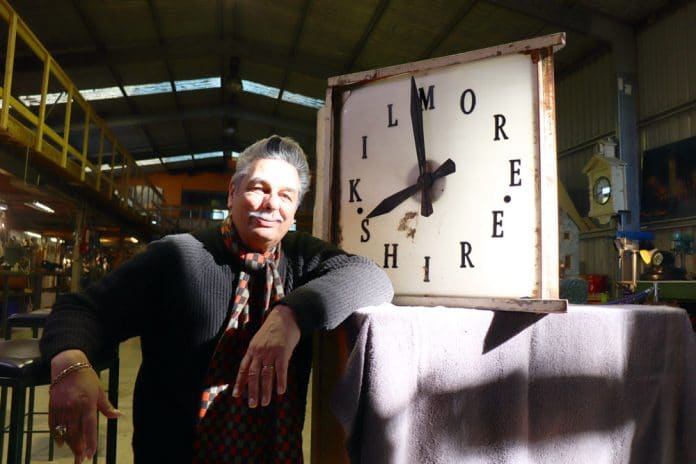 Vivian C. Kenney has spent nearly half a century immersed on the magical world of art, time and fantasy.

As an antiquarian horologist – a master clock-maker and restoration expert and past president of the Australian Antiquarian Horological Society – he has built one-of-a-kind clocks throughout the world and restored many including the Southern Cross Station piece and Flinders Street Platform Clock.

Now, he has discovered and is in the process of restoring Kilmore’s old Town Hall Clock.

“I’m so pleased to finally get the go ahead to restore Kilmore’s old clock,” he said.

“Thank goodness the Rotary Club of Southern Mitchell came to the rescue to fund and start this important restoration. I can’t wait to do them justice and get it up and running,” he said.

“I’m building a four-metre high pole in the same shape as the clock, which has two dials in a V or pie shaped case that could read in its heyday from both sides as people pass through the town.

“This is a very unusual clock and rarer still for having the words Kilmore written in a circle on both dials.”

Mr Kenney said he was lucky to have Mitchell Shire engineer Tim Partridge and his new team of urban planners behind the project.

“These are a group that have real insight on how to improve country towns,” he said.

In Mr Kenney’s house and workshop is his previous works including model engineering boats, cuckoo and grandfather clocks, large-scale Lego and his ‘pixie land’, a seven-metre long diorama for children.

“Children love it, but don’t you think we are all like pixies? It’s like when you fall in love and you’re transformed into this magical world between someone and everything becomes possible and one sees the world as it truly is – absolutely wonderful,” he said.

Mr Kenney said Kilmore’s first big clock – before the town hall clock replaced it – stood on the street close to where the new clock would stand.

“I find that a terrific coincidence and I’m sure this will delight Kilmore Historical Society as they too are instrumental in making this project finally happen,” he said.

For more information on his work in Kilmore, email Vivian at; viviankenney@bigpond.com.