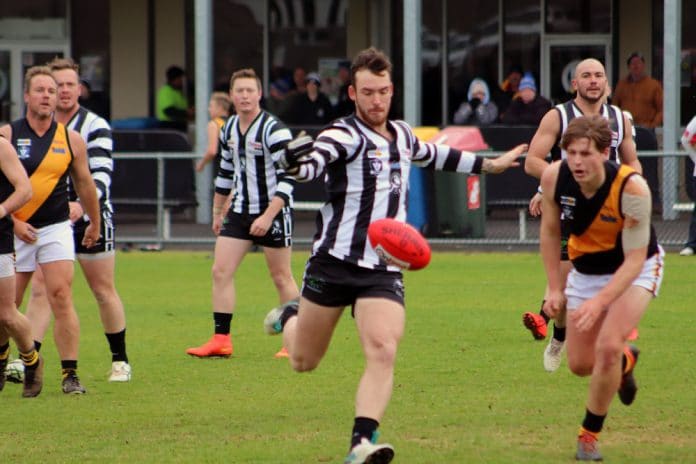 Wallan stormed home to a 267-point win over Lancefield at Greenhill Reserve on Saturday.

The win improves the Magpies’ record to 6-3 through 10 rounds and gave them the percentage boost needed to jump above Rupertswood on the RDFNL ladder.

Lancefield, meanwhile, are 1-8 and two games clear of winless Rockbank.

After the Magpies opened scoring, Lancefield replied in-kind quickly but it was all Wallan for the rest of the first term as they kicked the next nine goals to lead by 56 points.

The Tigers kicked their second and final goal in the second term as the Magpies booted 10 more of their own to lead by 113 points at half-time.

The second half was all Wallan as Lancefield was only able to add three behind to its total.

A 17-goal third term for Wallan blew the lead to 217 points and the Magpies cruised home with another eight goals in the fourth quarter.

“We had a poor first quarter last week so that was a big focus for us. Lancefield didn’t stop trying all day, they kept working.

“We kicked the first and they kicked the next but we won the quarter by nine goals but they kept having a crack so great credit to them.”

Mathieson said there are a few changes to side with players returning from injury and he was encouraged by the performances of some of the younger Magpies.

“We played some under 19s last year and this year they’re being given an opportunity in the seniors, like Angus Love and Lachlan Inness.

“They played their role down back but when they had the opportunity to make an impact, they did.”

The Magpies travel to Romsey next week to take on the red hot Redbacks in what might be the match of the round.

“Romsey are flying so it’s a big game. They’ve got a couple new recruits and it looks like it’s probably match of the round so we’re looking forward to the opportunity,” Mathieson said.

“We just want to keep our consistency from the past couple weeks, that’ll be the main focus this week.”