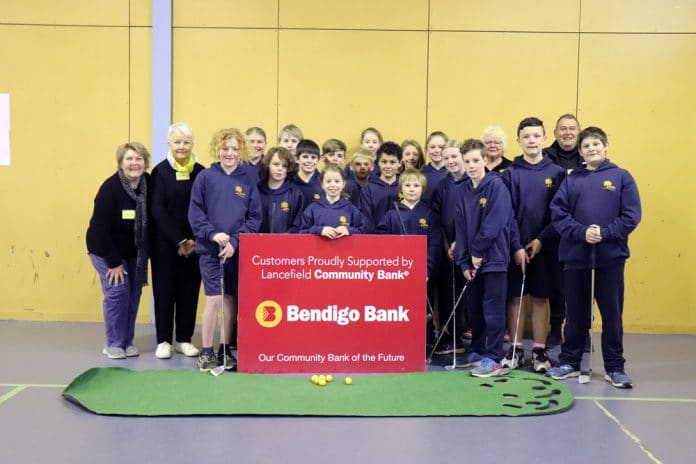 One of Lancefield Primary School’s students could be the next Jason Day as grade six students start a four-week golf program to get them to try a different sport.

Lancefield Golf Club approached the school to try the program after receiving a $600 grant from the Lancefield Community Bank Branch of Bendigo Bank to run the program.

Treasurer Alan Inman said the club wants to give children an alternative to the mainstream sports.

“There’s cricket and footy but do the kids often get an opportunity to try golf,” he said.

For the kids first session, four volunteers from the Lancefield Golf Club taught students the basics of the game, how to hold and swing a club and how to putt.

At the end of the four weeks, the children will get taken down to Lancefield Golf Club where they’ll have the opportunity hit the links for real.

“We’ll do three at the school in the hall, just to see how they improve and on the fourth, we’ll bus them down to the club and we’ll take them out and they can hit a real ball,” Mr Inman said.

“They can also have a go on a real putting green and after that we’ll give them some tucker and a bit of a chat and give them a certificate from the club.”

Part of the program is trying to pique the students’ interest in golf and possibly get them involved in the club in the future or even start a junior program.

“The whole thing is to try and bring golf top of mind with the juniors so if they want to play golf, we’re going to make it available to the juniors in the town,” Mr Inman said.

The club will also bring the program to St Mary’s Primary School in the coming weeks.

Mr Inman said it was great to see the children enjoy their first taste of the game.

“It’s interesting to see some of the kids, they’re naturals and they’re really listening and are striking the ball quite well,” he said.

Lancefield Primary School principal Jo Emond said the club has gone to a huge effort to put the program on.

“The whole sport lines up with our school values of being resilient, persistent and not giving up, all those things we want our young people to be able to do.

“We’re really grateful to the club for supporting the school and looking forward to working with them in the future for more opportunities for our kids.”