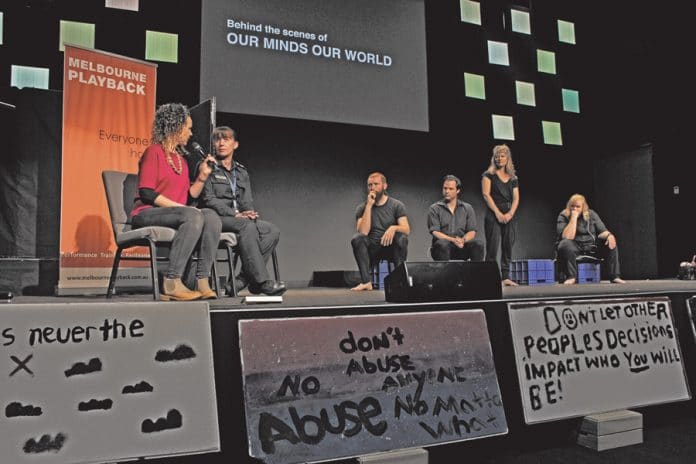 IN what would seem like an unlikely trio, Whittlesea police, high school students and Melbourne Playback Theatre Group have collaborated to build positive relationships between police and young people.

The Lakes South Morang School worked with Whittlesea Police at a safety expo last week. as part of an ‘Our Minds, Our Worlds’ community based art project.

The expo showcased the students’ art work and film to other schools including Mernda Central, Epping Secondary and Hazel Glen colleges.

Inspector Andrew Falconer the collaboration enabled discussions on crime prevention and community safety, funded by the Department of Justice.

“Often there’s media reporting about youth and youth offending – what is often forgotten is the troubles and issues that youth face while growing up,” he said.

“While youth can be the offenders – the majority of crimes are committed against other youths.”

Melbourne Playback Theatre added to the expo by using interpretive and impromptu drama to perform skits that high school students explained when talking about safety concerns they had in the community.

One student bravely spoke about her history with police in the past, and the drama group conveyed the scenarios she described through theatrical scenes.

“This middle year transition is where students are establishing their habits for life – it’s a chance now to help them transition and get into those good practices rather than going down the wrong path,” he said.

A film screening produced by Whittlesea Police and The Lakes South Morang School concluded the event.

“From the project today – the students will be giving us feedback about their concerns and thoughts,” Insp Falconer said.

“That way we have a really good sample across the City of Whittlesea to then show council and the State Government to say these are the issues and concerns of the kids that we need to help them with.”