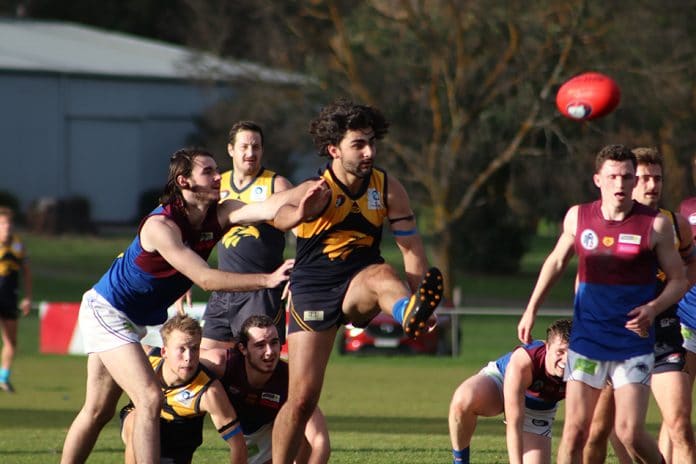 A slow start was costly for Whittlesea as the Eagles suffered a 44-point loss to undefeated Banyule at home on Saturday.

Whittlesea kicked just one goal in the first half as the Bears went on a scoring spree.

The Bears followed up by keeping the Eagles to just two behinds in the second term and adding four goals straight to their tally to go 62 points in front at half-time.

Whittlesea coach Blair Harvey said his side simply didn’t execute the game plan in the first half.

“We went in with a bit of a plan and in the first half we didn’t get it right at all,” he said.

Facing a 10-goal deficit, the Eagles pulled it together and brought the margin back to 47 points with a four goal to two third term.

While the Eagles started to put a few good moments of play together, it wasn’t enough as the Bears were able to hold them off.

Harvey said if the Eagles had executed their game plan from the start, it could’ve been a different result.

“The only real positive was the second half, the boys fought back and were able to execute the game plan and pecked it back a little bit,” he said.

“I think that’s been out problem all year, we haven’t been able to play four quarters of football so that’s out challenge for the rest of the year, to get some consistency out of the four quarters.”

The loss keeps Whittlesea at fourth on the Northern Football Netball League division two ladder at 4-3 but with a game in hand over third-placed Thomastown to have yet to have a bye.The Eagles travel to Thomastown next week in a fixture that could have major finals ramifications.