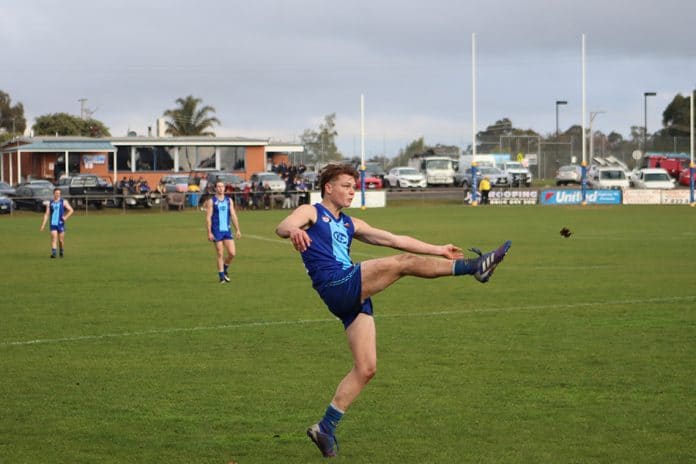 Kilmore has improved its record to 6-2 with a 40-point win over Old Eltham Collegians at home on Saturday.

A tight start saw each side kick three goals straight in the first term to go into the first break tied.

The Blues hit their stride and kicked away in the second term, opening up a 20-point lead with a 4.5 to 1.3 quarter.

The Turtles were anything but slow coming out in the second half as they bought the margin back to 15 points at three-quarter time with a six goal to five third term.

Kilmore quickly put a stop to Old Eltham’s momentum, holding the Turtles to just one goal in the final term and booting five more of their own to run away with the win.

Kilmore coach Nathan Phillips said the Blues’ outside run was key in the last quarter.

“They were only two goals down at three quarter time so they kept us honest but we were able to overrun them in the last quarter with our relentless outside run,” he said.

“They’ve been close in every game so we knew they’d play out the four quarters and if we continued to run and the boys gave 100 per cent, we get rewarded and to their credit they did.”

Phillips said Steven McIntyre was huge down back for the Blues.

“He didn’t get beaten all day and held off most of their entries he was involved in,” he said.

“Chris Ryall was good in the midfield and went forward and kicked a couple but everyone was good.

“The guys who came in due to injury were also able to contribute so I was happy with the overall performance.”

The Blues take on Reservoir away this week but Phillips isn’t taking the task lightly.

“We can’t take any game lightly. Reservoir ran Laurimar pretty close so we’re not resting on our laurels and thinking we can roll up and beat them,” he said.

“We’re going there with the mindset that they’re going to give us a run for our money.”