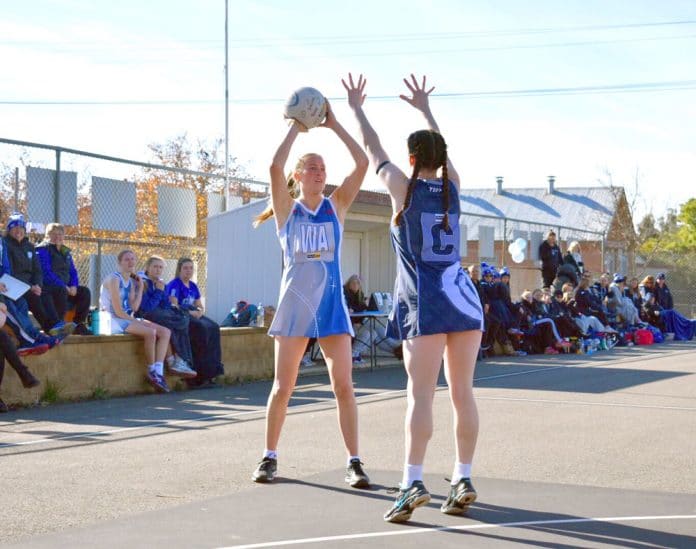 Broadford followed up from its first A Grade netball win in two years with another win on Saturday, this time over Melton Centrals.

Melton Centrals were in control early, taking a 13-8 lead after the first quarter.

The two sides were neck-and-neck in the second quarter but the Kangaroos were unable to close the margin, as both sides scored 10 goals each.

Broadford got on top after half time, outscoring the Blues 19-8 to take a six-goal lead into the final break.

While Melton Centrals pushed for a comeback, the Kangaroos held on for their second win in two weeks.

Broadford is now seventh on the ladder, just a game and a half out of a finals spot.

Romsey improved to 5-2 with a seven-goal win over Diggers Rest on Saturday.

The Redbacks led at every break on its way to the 49-42 win.

Romsey opened up a six-goal lead after the first quarter and continued to put the pressure on in the second term to lead by 10 goals at half-time.

Diggers Rest was able to reel in the Redbacks somewhat in the third quarter, closing the gap to eight goals.

Romsey had to fight off a valiant Burras comeback to take the win on the road.

The Redbacks’ shooting was on fire with goal shooter Rebecca Hicks taking on the bulk of the scoring load, shooting 39, at 91 per cent, while Chelsea Ross was a perfect 10 goals from 10 shots.

The Redbacks are in third, a game back from Macedon and ahead of Wallan on percentage.

Lancefield’s A Grade netball side remains winless after a 74-27 loss to Rupertswood.

Lancefield were within reach after the first quarter, just 10 goals behind but the Sharks’ 22-5 second quarter made for a tough uphill battle for the Tigers.

Another 20-goal quarter for the Sharks blew the margin out to 38 goals at three-quarter time.

Rupo rolled home with an 18-9 final term for the win.

The Sharks’ defence was stifling, keeping the Tigers to just 63 per cent shooting for the match.

Another 20-goal quarter for the Sharks blew the margin out to 38 goals at three-quarter time.

Rupo rolled home with an 18-9 final term for the win.

The Sharks’ defence was stifling, keeping the Tigers to just 63 per cent shooting for the match.

Magpies take out a thriller