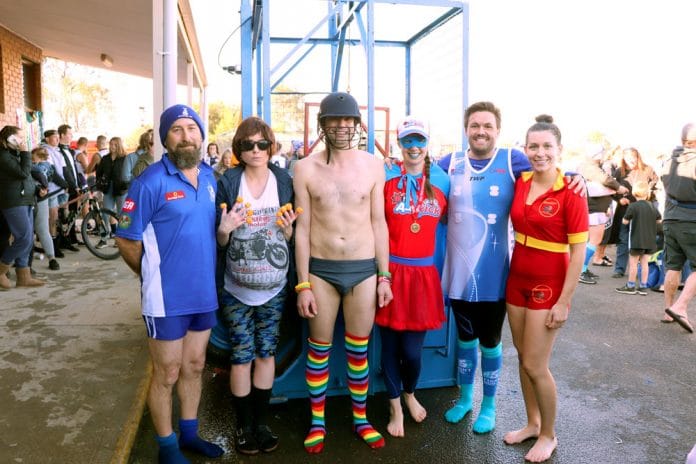 While it’s usually a bit chilly at the footy in June, it was a bit colder in Broadford on Saturday as the Kangaroos hosted their own version of the Fight MND Big Freeze.

It was the first time the club has participated in the fundraiser and it was timed just right as Broadford hosted Melton Centrals at Harley Hammond Reserve and both clubs jumped on board for a good cause.

Thirteen representatives from both clubs climbed into a dunk tank filled with icy water to help raise money to fight Motor Neurone Disease.

The club raised more than $3500 on the day for Fight MND, with that number still rising.

Broadford Football Netball Club secretary Amanda Rothwell-Hiscock said it was a great way to help out the charity.

“We thought it’s a great charity and what a great way we can be involved by having our own Big Freeze,” she said.

“With the dunk tank, we thought let’s do something different. We could get the crowd involved and it was another way we can raise some donations as well because who doesn’t want to see their coach get dunked into ice water and, more importantly, dunk them in the water?”

“We wanted to make sure everyone from the community was involved, we had the Broadford CFA come and donate the water rather than wasting water as well. We thought that was another way to get people involved,” Ms Rothwell-Hiscock said.

The day was a smash hit as the club twice sold out of beanies and has another 30 on backorder, raising more than $2000 before the day even started.

“We’re really honoured that we can be involved in such an amazing cause and have our own Big Freeze, and we look forward to doing it again in the future,” Ms Rothwell-Hiscock said.