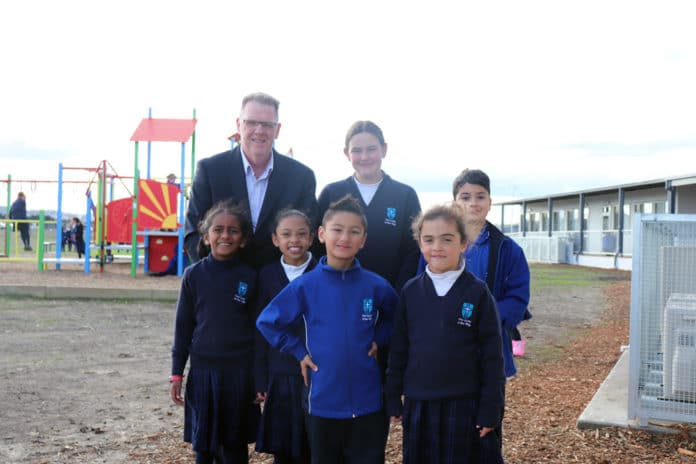 AFTER months of waiting, Our Lady of the Way Catholic School has finally moved into its new campus in Wallan East.

The school was being hosted by St Patrick’s Primary School in Kilmore last year while they waited – what was planned to be a stay of one term turned into 12 months.

Students and teachers thought they would be able to move into the Wallan East site at the start of this year but delays meant they were taken in by Assumption College while they waited.

Principal Terry Cooney said it was great to finally move into their new buildings.

“The other schools were fantastic with their support but it’s just nice to have our own space,” he said.

“Our children have their own space to run around. It’s their school, they’re not visiting another place and they can create it as their space.”

The school is growing rapidly, starting last year with 63 children over three classes to now having 160 students and seven classes.

Eventually the school will have a total capacity of 600 students.

“It’s growing quickly and there’s 60 enrollments for prep for next year plus other ones so we’ll probably grow by another 100 or so for next year as well,” Mr Cooney said.

“Another building with four more classrooms will be built this year to accommodate for next year then the next stage will go after that so it’ll probably be like a building site for the next three or four years as it grows.”

Mr Cooney said he was thankful for the support of parents during a time that’s been less than convenient.

“When I was appointed to the position, we thought it might be a term at St Pat’s and it ended up being 12 months. Then we weren’t in again but they’ve been really understanding and supportive and they’re really happy that we’ve got our own space as well,” he said.

“There’s lots of work to do but we’ll get a great community out of this and people are actually really keen to put in and work and build it up as their own. They’re really keen to be those foundation families.”

Call to stand up for standpipes across shire