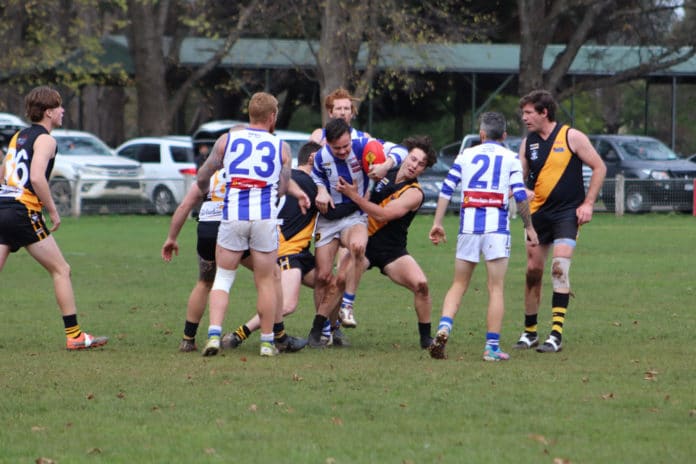 Broadford had its second win of the season with a 28-point win over Lancefield on Saturday.
With both sides coming into the contest 1-4, it was anyone’s game.

It was a close contest early with the Kangaroos and Tigers separated by just two points at quarter time, as both sides kicked four goals each.

In front of a home-town crowd and past players celebrating a 10-year Tigers premiership reunion, Lancefield hit back in the second term kicking another four goals to two, and taking a nine-point lead into half-time.

The Kangaroos came out for the second half looking like a different team.

They kicked 6.4.40 in the third term, doubling their half-time total and holding the Tigers to just eight points. Broadford led by 23 points at three-quarter time.

Broadford coach Jamie Kelly said the key to the third quarter surge was focusing on playing their brand of footy.

“In the second half we played our brand and controlled 80 per cent of the game. The main focus was getting back to playing out footy, not theirs which we did,” he said.

Broadford solidified the lead in the final term, kicking two goals to one to head home with the win.

Callum Langborne was unstoppable for the Kangaroos, kicking a bag of eight goals.

Kelly said he was pretty happy with the win and it would lift the club’s spirits after a tough start to the season.

“It gives a bit of confidence back to the group. We didn’t play as well as we could’ve but a win’s a win at the end of the day,” he said.

“Callum’s confidence had been down so it’s good for him to kick a bag. Hopefully our confidence continues on this week to Melton Centrals.

“We said before last week we want to win two of our next three, so it’s either Melton Centrals or Woodend Hesket, which are both above us on the ladder.”