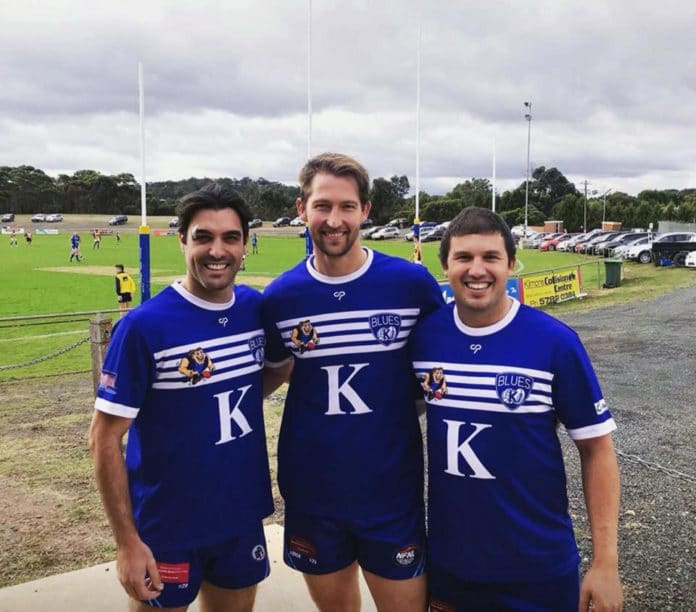 The Blues went 8-8 in 2017 and finished fifth on the ladder, narrowly missing out on finals.

In 2018, 11 players left the club, including five to one club a short drive down the Hume Freeway – Kilmore finished 7-9 and missed finals again.

President Paul Maher said during the offseason, the club had focused on the success of the junior club, giving juniors an opportunity to progress through the ranks into the senior side.

The Blues also recruited previous juniors back to the club.

“Over the last break, we managed to entice basically the cream of the crop from the Assumption College First XVIII,” he said.

“We’ve had kids like Shane Skidmore, Nick Zaharakis, Bailey Taylor-Egan and Kieran Binion come to the club and they’ve joined kids they played with in the juniors with such as Grant Paxton and Riley McLaughlin, so we’ve got a really good crop of young junior players who have come into the club in the offseason.”

The club also brought in several recruits who have connections with the club such as Stephen McIntyre, who played his junior footy with the Blues before moving on to higher level leagues, and Chris Ryall who was a boarder at Assumption.

Bringing in talented local players means the Blues have been able to stay well under the NFNL’s player points system threshold.

“We’ve got 20 one point players which means they’re all local product. Of the 22, 20 have been locally born-and-bred boys who have come back or stayed at the club,” Maher said.

“If we can win a flag, we want these young people to be part of history and for Kilmore to win its first flag in the NFNL.

“They don’t need to leave Kilmore to play at a higher level.

“If we can win a flag, they can stay at home and play at a higher level so that’s something we’re really pushing.”

Losing 11 players over the offseason meant players had to come up from the reserves, leaving the seconds struggling to field a side.

Maher said the club considered putting the reserves into recess for a season until it could bolster numbers but the local recruiting paid off for the twos as well.

“That’s probably been the biggest turnaround. We’ve got such depth in our numbers that we unfortunately have guys missing out on games in the reserves,” he said.

“They’re currently undefeated at 6-0 and second on the ladder so they’re a huge success story.”

Proof of the Kilmore connection was evident when captain Ben Tsakmakis, Marcus Webb and Stephen McIntyre played their first game together for 14 years after playing in the Assumption First XVIII.

Tsakmakis said having more local talent had allowed the club to build a culture that’s translated to on-field success.

“If you can target those young guys who are quite talented and get them playing footy for Kilmore instead of going elsewhere, it’s really good,” he said.

“It resonates through the younger years as well that we can be successful and people want to keep playing for the Kilmore footy club.

“If you have a good culture, it can really transfer into on field success.