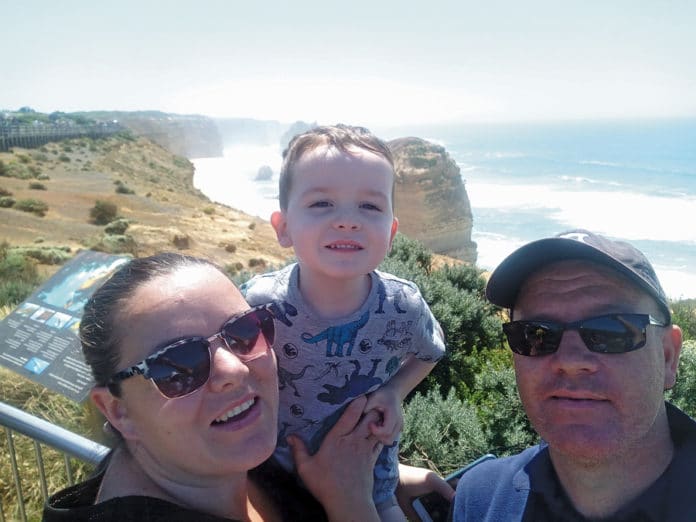 The Hyde family has lived in Australia for the past decade, making their home in Seymour but despite a four-year struggle for permanent residency, they were last week sent a written deportation letter to leave the country.

Christine and Tony Hyde have been told their family has until June 18 to pack up and depart Australia as their three-year-old son Darragh ‘does not meet the health criteria’.

Darragh was conceived while the couple applied for permanent residency in 2015 – once he was born a mandatory medical assessment confirmed he had Cystic Fibrosis.

The Hyde family then received a response from the Home Affairs Department stating that Darragh would need to rely heavily on the health system to have access to an organ donation.

They said he would be a ‘burden to the state’ and rejected their application.

The result from their final appeal was received last week, leaving the family in complete shock and unsure of what to do next.

“We had been warned that our application might be unsuccessful, but when we read that we have 28 days to leave, that was what really broke us,” Mrs Hyde said.

“It’s so scary because we live here, we work here. We now need to pack up our lives?”

The letter recommended the Department of Immigration refer the case to the Home Affairs Minister Peter Dutton, which the Hyde family have requested.

“This is a recommendation, what if he doesn’t respond or approve this? Are we meant to wait around and hope or do we start packing now,” she said.

Ms Hyde said Darragh was unaware about the case and the possibility of deportation.

“He’s got no idea that there’s a potential of us leaving – I don’t even want to go there,” she said.

“They’re effectively Aussies. The young boy was born here, some compassion and some common sense [is needed],” he said.

“There’ll be some costs for the medical treatment he needs, but there will be so many more benefits to Seymour, to that local community and indeed for all of us.”

Federal Member for Nicholls Damian Drum said his office had been talking to Ms Hyde and the department involved following community calls to allow them to stay.

“We’ve written to Minister Coleman but as he is not back in his role yet we’ve had to go straight to the department,” he said.

“The tribunal ruled against the family but they did make comment about potential opportunities for ministerial direction – so we have written and followed this up.”

Ms Hyde, an assistant principal at Broadford Primary School, said the community had given them hope, following an online petition attracting nearly 100,000 signatures.

She spoke of a similar case, the Kinley family with a deaf son, who were given a last-minute reprieve from the immigration minister.

During the appeal process, Darragh started taking a medication called Kalydeco – a drug covered under the Pharmaceutical Benefits Scheme – which helps improve hydration and mucus clearance.

Cystic Fibrosis is a genetic condition that causes thick, sticky mucus to build up in various organs that can impact the lungs and digestive system.

“It has changed his life in the last 18 months, there is less mucus in his lungs, which makes him less prone to infections and has had no hospital admissions.“He goes to childcare twice a week. He’s just like every other child.”