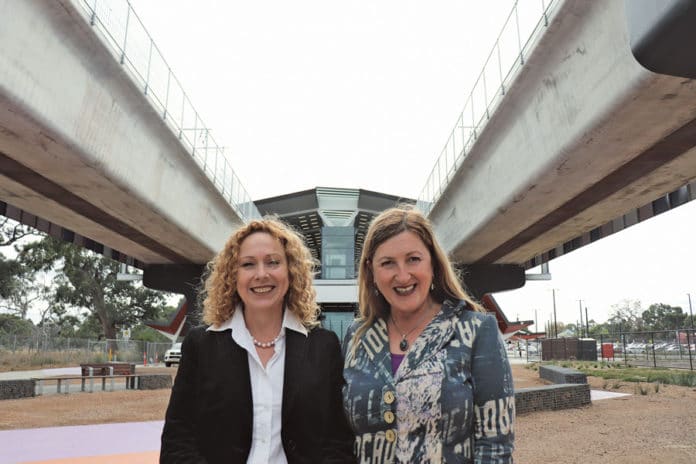 MORE than one million passengers have used the Mernda Rail line in the nine months since the extension opening.

Minister for Public Transport Melissa Horne met with Member for Yan Yean Danielle Green to visit the station and reveal the statistic.

“Last year we brought passenger trains back to Mernda for the first time in 60 years – one million trips in nine months show this was the right thing to do,” Ms Horne said.

The extension has provided passengers in the Plenty Valley, three more stations, more trains more often and better bus links, with the number of people using the line increasing by nearly 50 per cent since opening.

“We’re providing services where they are needed most and changing the way people live, work and travel in Melbourne’s growing northern suburbs,” Ms Green said.

Passengers travelling from Mernda to the city have access to 982 services every week running every six to eight minutes in the peak, with two new and seven realigned bus routes introduced to coincide with the opening of the rail extension.

The rail extension and Plenty Valley Bus Network have given residents of the northern suburbs and surrounding areas, more ways to travel with almost 2,600 passengers using Mernda Station each day and 1,000 trips at both Hawkstowe and Middle Gorge stations.

Politicians says the figures mean about 5,000 cars have been diverted from the roads each day, and more people are using public transport as an alternative.

Cycling to train stations on new paths are also proving popular with nearly 1,000 people using the bike storage facilities at South Morang and the three new stations. Almost 400 of those are at Mernda.

Work to improve safety and deliver more trains on the Mernda line is continuing with five level crossing removals and three new stations at Reservoir, Bell and Preston to be completed by the end of 2022.

Planning for the second stage of the Hurstbridge Line Upgrade is also underway with construction expected to begin in early 2020 – including a new station and bus interchange at Greensborough and more train services.