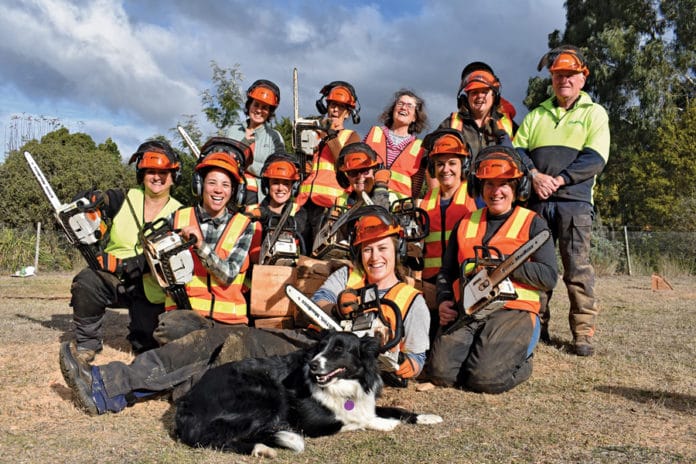 A first-of-its-kind program is empowering women in the Macedon Ranges, giving them independence, a greater sense of gender equality and the practical skills to look after their property.

The women are learning how to use chainsaws to use on their property and in emergency situations.

As part of the State Government’s ‘Safer Together’ initiative, about 20 women have spent three weekends in May undergoing accredited training, emergency preparedness and chainsaw sculpting in the hopes of building gender equality and resilience in the community.

Macedon Ranges Shire Council’s Women Chainsaw Club Program will up-skill women so they can safely and confidently use a chainsaw and operate other relevant equipment – not only in the lead up to and during fire season but throughout the year.

The program is an action in the 2018-19 Prevention of Violence Against Women in Emergencies Action Plan.

Romsey Neighbourhood House co-ordinator Michelle Balthazar said the project was the first of its kind.

“They ran a pilot project last year in Benloch that was hugely successful and had a huge demand with over 102 applicants,” she said.“

Following the Benloch fires in 2015, that community was chosen because they were still in recovery and the need to use a chainsaw in a fire prone area is essential.

“It’s great to see how empowered the women are. They were so nervous at the beginning and normally rely on their husbands or another male to do this work – what happens if they are at home alone? They need the skills to look after themselves.”

Trainer Bluey Bettles – who has worked in forestry for 28 years and is Stihl’s preferred trainer in Australia – said it was the first time he had worked with women.

“I hate to admit this, but women take more notice of you because the guys are a bit gung-ho and macho – including myself,” he said.

“The industry is very dangerous so we’ve got to look after one another – I’ve lost several buddies in the forest to chainsaw accidents.

“These women have taken everything I’ve said on board. Why should they have to rely on males to cut their wood? Because they are terrified of chainsaws. After this training they have the knowledge, skill and techniques to look after themselves.”

Lancefield and Goldy residents Cindy Prendergast and Georgie Campbell were part of the program and said they previously had no idea how to use a chainsaw.

“It’s all about the safety factor. I’ve used a chainsaw before but not in a safe manner. I’m so much more confident now, if there’s a tree on the fence or on the road I can move it out of the way,” Ms Campbell said.

“I’ve absolutely loved it. It’s important that we know how to use them in order to prepare for bushfires as well,” Ms Prendergast said.

“This is so people can borrow what they need without buying their own – it can be for anyone in the community who have participated in one of our programs,” she said.

“In natural disasters, the risk of domestic violence increases – it feeds off the sense of inequality. It’s important that we empower women and create gender equality.”