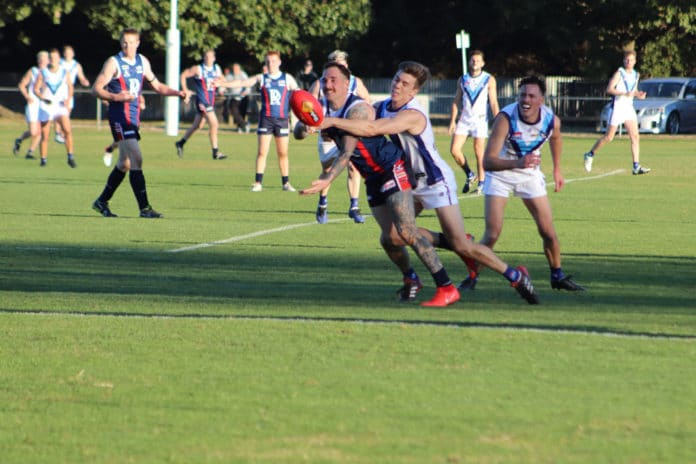 The RDFNL side was under the pump early as SFNL ran out to a 13-point lead in the first quarter.

The hosts replied in the second term, booting three goals to one to bring the deficit back to a point at half-time.

The RDFNL was quick to open the scoring in the second half with a goal to Romsey’s Mitch Jensen one minute into the third term.

The SFNL controlled possession late in the third term but struggled to convert and paid the price as a goal to Melton Centrals’ Dylan Weir put the RDFNL in front at three-quarter time.

The RDFNL finally replied with a major to Mitch Jensen at the 20-minute mark of the final term, with a scoring barrage seeing Dylan Weir and Jason Caruana also adding to the scoreboard minutes later as the scores were level at the 25-minute mark.

Romsey’s Jack O’Sullivan and Mitch Jensen protected their home turf, each kicking late goals to give the RDFNL a five-point lead at the 29-minute mark as the hosts were able to hold on for the win.

RDFNL coach Ben Tankard said he was proud of the comeback.

“Most had us as pretty big underdogs but it was a fantastic result under the circumstances to come back late. We didn’t give in and stayed close enough and eventually overran them,” he said.

“Daniel Toman was easily the best on ground. He played most of the game in the midfield and didn’t turn the ball over.”

Tankard said the coaching staff almost gave up hope late in the piece but the players didn’t give up.

“I think the credit has to go to the players. We were 19 points with four minutes to go and we thought the game was probably gone,” he said.

“We asked our defenders to roll the dice and stream forward. Once we got the first one, we got some confidence and the second one gave us a big wave of momentum that was unstoppable.

“The players we picked really wanted to play, we didn’t pick just the best but the players who put their hands up. They really pulled together and desperately wanted to win.”

The RDFNL’s young guns also had a win, beating the SFNL by a goal in the Under 19 curtain raiser at Romsey Park.

Tigers brave the wet in loss