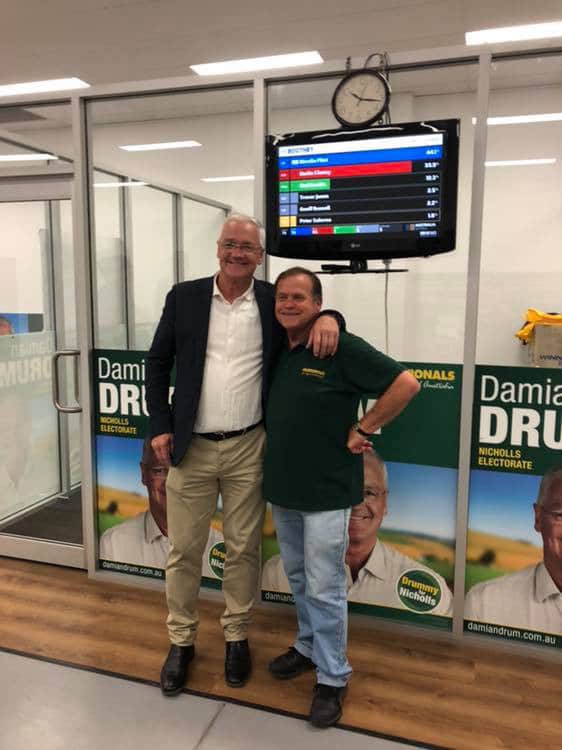 Despite not gaining the majority of votes in the Mitchell Shire, the Nationals’ Damian Drum was elected to represent the newly-formed seat of Nicholls.

Polling stations in the southern end of the electorate swung towards Labor with Broadford, Tallarook and Seymour voting 58.6 per cent, 51.3 per cent and 51.9 per cent respectively towards Mr Lodwick on a two party-preferred basis

But it was the northern end of the seat that delivered traction for Mr Drum who claimed the traditionally safe coalition seat which has recorded a conservative vote 20-30 per cent stronger than Victoria as a whole.

Mr Drum told the North Central Review that it was a humbling feeling to be elected as a regional representative.

“I know people are doing it tough out there, there’s still a lot of work to be done,” Mr Drum said.

Mr Drum won 52.2 per cent of first preferences and on a two-party preferred basis, Mr Drum claimed 71 per cent of the vote with ALP Candidate Bill Lodwick on 29 per cent.

The Nationals MP said a lot of work had to be done in Seymour and that he was committed to building on the veterans’ work in Puckapunyal.

“What’s worked well so far is having strong connections with community leaders and always being accessible to council and the business sector so whenever community groups have initiated that they need assistance, I’m 100 per cent  accessible to these groups and I’ll work with them to deliver whatever they need,” Mr Drum said.

The former AFL player and Fremantle Dockers coach said he was surprised with the Liberals’ win.

“I think Morrison used the right term when he spoke about the quiet Australians,” he said.

“The quiet Australians feel they can’t express what they truly think – there’s a strong silent majority who keep their opinions to themselves, but when it comes to election time they show their support.”

Mr Drum said the best part of his campaign leading up to the election was to show what he had achieved over the past three years.

“I was able to say, you tell me the area you’re interested in and I’ll point to the achievements in the area – we were able to look to our regions and say we have delivered for our people,” he said.

Mr Drum thanked the people of Nicholls for re-electing him for a second term in parliament.

“From myself and Lindsay Dan, president of the Nicholls National Party, thank you to the many volunteers for their immense efforts during the campaign. Thank you also to my fantastic family and team for their support,” Mr Drum said on Twitter.

Scouts on the airwaves