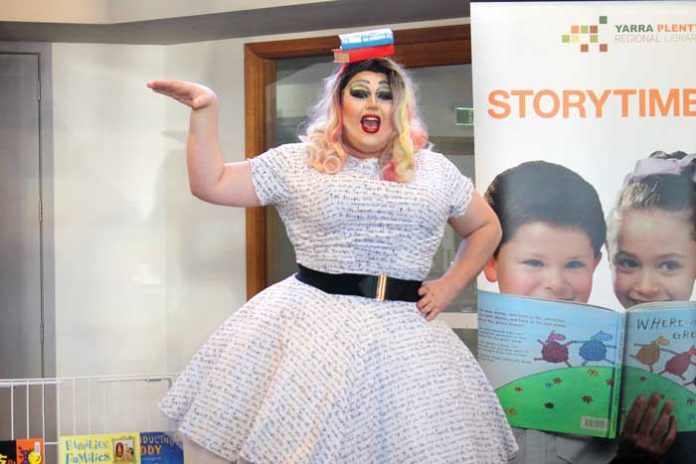 Despite unwelcoming comments leading up the event, a reading by Drag Queen Annie marked International Day Against Homophobia, Transphobia and Biphobia in Whittlesea.

They listened to encouraging messages in the children’s’ books about celebrating diversity and stories about gender, such as Introducing Teddy by Jessica Walton and It’s okay to be different by Todd Parr.

“It’s touching that I can come somewhere that is so far from where I am to celebrate International Day Against Homophobia, Transphobia and Biphobia, IDAHOBIT Day,” Annie said.

“To be able to come to these sort of things and say ‘be who you are and it’s okay being different.’

”Earlier in the week online trolls responded to the event on Facebook calling it ‘absolutely abhorrent’ – ironically the type of behaviour IDAHOBIT Day advocates against.

“Children do not need to be read to by guys dressing as strange women,’ a Facebook user said.

Annie said that to her, IDAHOBIT Day meant not backing down from bullying of any kind.

“Today went very positively – I didn’t notice a single person that was sitting there frowning – I think it went really well,” she said.

Member for Yan Yean Danielle Green attended the event in support of the day, wearing a bright rainbow unicorn suit.

“If the Yarra Plenty Library and these parents continue – we’ll have a better community, because these kids will be growing up respecting diversity and not hating difference.”