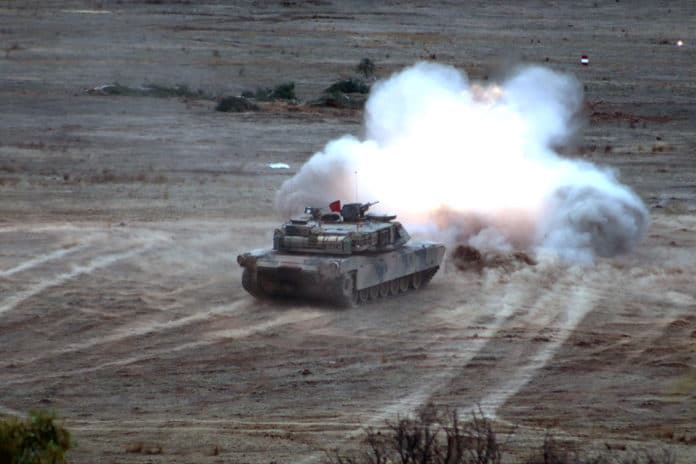 Those loud noises in the distance weren’t thunder, but the Australian Army showing off its capabilities in a live-fire display at Puckapunyal on Thursday.

An operational scenario showed the joint capabilities of the Army, including M1A1 Abrams tanks, a M777A2 Howitzer and a Tiger armed reconnaissance helicopter.

“Puckapunyal’s a training base and this is the pinnacle of what we train our soldiers to do. They employ combined arms tactics in a setting where we get to integrate all the different capabilities Army owns so it’s great to be able to do this every year,” Col Parker said.

“There are a lot of people running around on base but it’s good to expose the community and all the different people who come to Puckapunyal to exactly what goes on here.

“I know there’s a lot of mystique about what goes on at army bases but this is the forefront of training for Australian Army so it’s great to have them here.”

The exercise was attended by members of the defence industry, media and military personnel from the United States, Canada and Germany, among other countries.

Chief of the Australian Army, Lieutenant General Rick Burr said Exercise Ching Ju demonstrated the Army’s preparedness for operational deployments and showcased its capabilities to partners in the defence industry.

“We are an army in motion. We are prepared to deploy our versatile capabilities for the joint force, which requires us to be ready to assist in crises here at home and across the globe, now and in the future,” he said.

‘Exercise Chong Ju’ is an annual Army exercise that’s named after a battle in North Korea in 1950 when the 3rd Battalion, Royal Australia Regiment, supported by tanks and artillery, attacked and captured a large North Korean defensive line during their northward advance to the Yalu River.