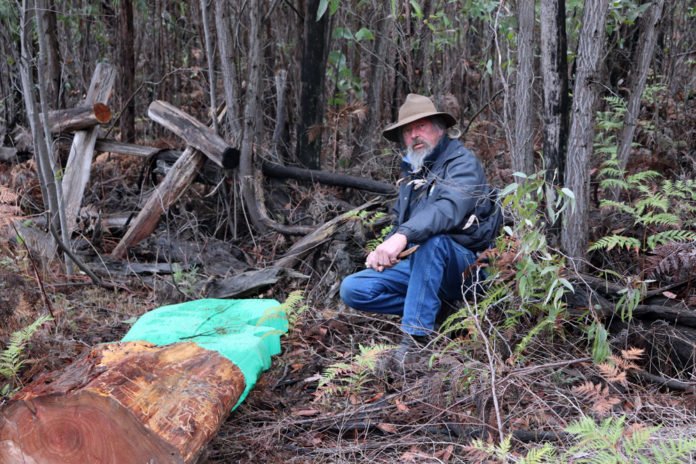 Wandong artist Ray McLean says he’s embarrassed after one of his sculptures commemorating Black Saturday’s 10-year anniversary has been taken out of the ground and discarded.

Mr McLean originally constructed the memorial in 2009 out of a cypress log burned in the fires at a property in Clonbinane and updated it March to commemorate the anniversary.

With a part of the old memorial falling into disrepair, Mr McLean said he designed the new addition to represent new growth.

A green leaf is carved out of a log from a property across the road from where the original log was found.

“They wanted something new to commemorate and it was 10 years after the event and I thought I would come up with a leaf, it looked quite striking against the scrub actually,” he said.

The original sculpture is still intact and features a series of native animals heading uphill to flee the bushfires.

“It was the story of the fires and everybody getting the hell out of there,” Mr McLean said.

Unfortunately, when the North Central Review met with Mr McLean at the site of the memorial in Clonbinane, the new addition was found discarded on the ground behind the memorial.

“I’m a bit concerned that the community asked for it and now it’s been thrown over there,” he said.

“At least we’ve still got it and I can put it back up, I suppose, but I’ll have to see the committee so see what’s going on.”

It’s not the first time Mr McLean has had issues with his work being stolen or damaged.

The leaf statue took Mr McLean two weeks to carve and he said he was shocked to find it dumped behind the memorial.

“I would’ve thought the community would’ve been happy about seeing something fresh. I hope I haven’t upset anybody,” he said.

“When Ned Kelly got stolen, I just thought ‘yeah, everybody loves Ned’ but I don’t know what’s going to happen with this.”