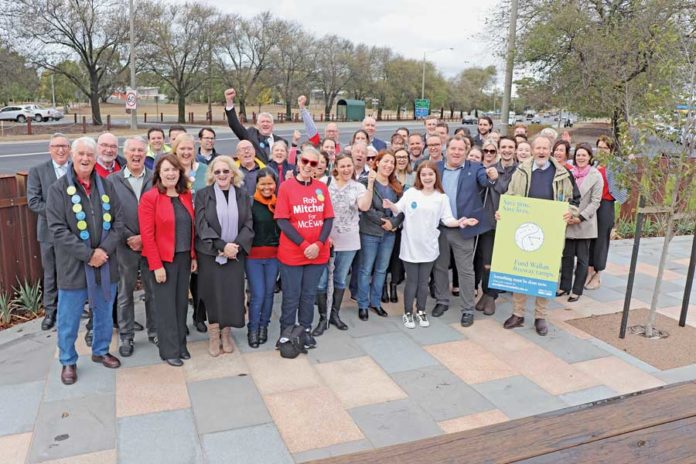 The Labor Party has committed a $23 million promise to construct a Hume Freeway-Watson Street interchange in Wallan should it be elected at the federal election on May 18.

The funding will go towards an estimated $47.5 million stage one project to construct a full diamond interchange at Watson Street and a path linking the town centre to the train station.

The interchange is one of Mitchell Shire Council’s priority projects as part of an federal election advocacy campaign as it will relieve traffic congestion entering and exiting between the Hume Freeway and Northern Highway.

Member for McEwen Rob Mitchell joined Mitchell Shire Council and the community at Wallan Town Heart on Thursday to make the announcement.

Mr Mitchell said the interchange would be the single biggest roads infrastructure project in Mitchell Shire since the Hume Freeway was built.

“It’s probably one of the biggest announcements we’ll make across the election and it’s here for Wallan and for Kilmore and for the people of Mitchell Shire to make life easier in emergency times and just day to day living, whether it’s going to work or going out of town,” he said.

Mr Mitchell said he was well aware of the traffic issues on the Hume Freeway, Northern Highway and Watson Street.

“The thing that always gets raised to me is, to use a quote, ‘the bloody traffic’. Everyone complains about the issues we have on the Northern Highway,” he said.

“Why are we forced to come into the intersection here on Watson Street, it’s the only way in and only way out.

“We know quite regularly, you come off the freeway at 110km/h and you have to hit the brakes because traffic is banked up.”

Mitchell Shire Mayor Bill Chisholm said the funding announcement was a game-changer for Wallan, the shire and anyone who used the freeway.

“It will unlock Wallan’s economic potential even further, it will help our community go about their lives more easily and it will help keep our national freeway moving,” he said.

“It is wonderful that we have two Federal election commitments on the board so far. I would like to thank federal Member for McEwen Rob Mitchell for listening to our community and understanding our priorities.

“We have met with many of the candidates and look forward to any further announcements they may have in relation to these two important projects.

”When asked by the North Central Review if the Liberal Party would match the commitment, candidate Philip Fusco said his party wasn’t “in the business for tit for tat”.

“Don’t start a project and leave it half finished, either you complete it or you don’t. I’m interested in delivering 100 per cent and that takes place over the course of a relationship in government.”

Mr Fusco said the Liberal Party had made their policy commitments clear, including the Urban Congestion Fund.

“Mitchell Shire is equally entitled to apply as the other McEwen shires and the government has made this fund specifically to contribute to these roads,” he said.

“It will be my job to keep allocating for the rest of what’s required. It won’t happen over two weeks before the election.”

Next step for park