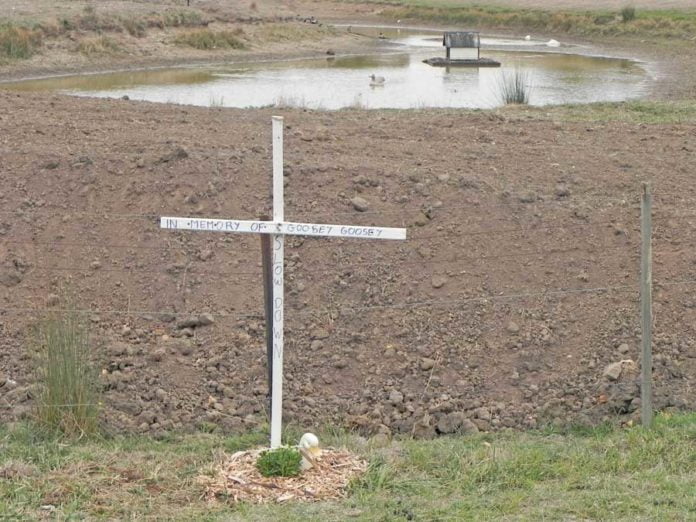 White goose didn’t have to be road kill

Two weeks ago, a white goose was run over and killed by a vehicle close to the intersection of Moffats Lane and Knox Road, Romsey, adjacent to the new Lomandra estate.

Three weeks prior at the same spot a western grey kangaroo met the same fate.

These animals and many others over the last year should not have died on roads like Knox, Black Range, Kerrie and Moffats lanes because they are minor rural roads not open highways.

The difference between minor rural roads and highways is significant, on open highways traffic travelling at or below the 100km per hour is expected.

On minor rural roads wildlife are part of the natural environment living in, grazing on and traversing their verges.

As well, on many landcare, and Land for Wildlife farms adjacent to the roadside verges, native animals are being encouraged to return by planting habitat in corridors and riparian zones.

The habitat and wildlife restoration taking place in the Romsey district through the efforts of landcare farmers and landowners over the last 30 has been spectacular. But now the returning wildlife is under increasing threat from two predators, vehicle drivers and foxes.It might surprise readers to know the two are connected.

As more wildlife die as a consequence of vehicle collisions and run-overs, more “easy” food is available for foxes which in-turn helps their population to increase. More foxes means increasing predations on wildlife living in Romsey district’s farm conservation corridors and public forests.

White goose’s death might go in vain as just an inevitable consequence of urban development in Romsey where the prevailing thinking by Macedon Ranges Shire Council is that nothing should impede the convenience of drivers to travel at up to 100km per hour on minor rural roads under its control.

So the shire does little to protect wildlife from becoming road kill except by erecting the occasional sign which most drivers ignore.

There is a solution to prevent more deaths like white goose, drive slower on minor rural roads even if the allowable maximum speed is 80 or 100km/hr.

This is ‘road kill’ speed because a driver is unable to avoid a collision or run-over when an animal suddenly decides to cross as a vehicle approaches. But at 60km/hr or less the driver has far more opportunity to avoid a fatal collision with wildlife.

I challenge the new residents of Romsey’s housing developments who are attracted to the town by its surrounding natural environment and country lifestyle (Romsey Issues Paper Oct 2018), and the teenagers and young adults who want action on improving the environment, to involve themselves in strategies that can produce immediate results by stopping road kill on minor rural roads.

I challenge these groups to lobby the shire council for action to slow vehicles down such as installation of speed humps and chicanes and to talk to their parents, relatives and friends about the consequences for wildlife of travelling on minor rural roads at greater than 60km/hr.

If new residents and young people are determined to lobby and talk they can achieve outcomes to improve our districts natural environment and give the animals that live in it an opportunity to thrive, not just survive if lucky.

Alternatively, they can sit back in their new houses and drive the local roads in air conditioned comfort isolated from the natural environment around them, interrupted only by putrefying smell of the rotting remains of white goose and other native animals as they drive by.

For many Baby Boomer, Gen X and Gen Y generation farmers and landowners, their property management legacy has seen a resurgent wildlife population.

Will the Gen Z and beyond generations take the opportunity to build on this achievement and protect wildlife on minor rural roads or ignore white goose’s fate and accept increasing wildlife road kill as a cost to nature of maintaining their lifestyles?

White goose should not have died as road kill on Knox road. It had been living on an adjacent farm billabong and road reserve for more than 12 months. The sign in the back ground on Moffats lane reads “Wildlife crossing”.