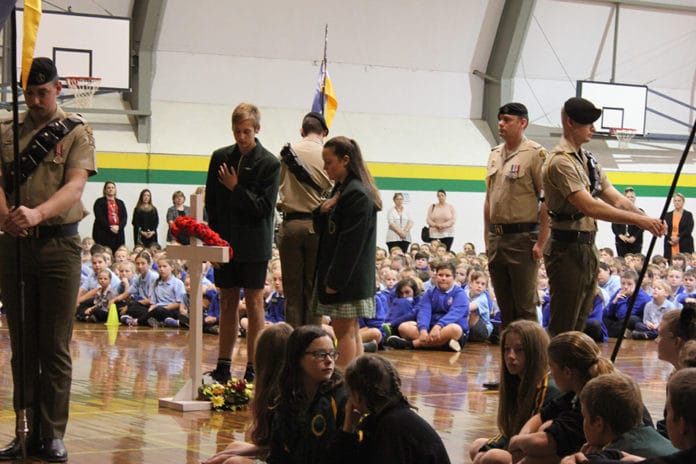 Broadford’s secondary and primary schools came together for a moving Anzac ceremony last week with Puckapunyal School of Artillery leading the procession.

“For an individual to enlist into armed forced, wear the uniform, pledge allegiance to our nation so that they can protect the values of democracy is a pivotal moment in our life, and one that will never leave them,” Mr Mills said.

“One hundred and four years ago men and women took that oath and they were not much older than our senior students here today.

“We’re here to remember all service men and women who have served our nation and who are currently serving our nation at home and overseas.”

“In 1966 my great uncle got called up to serve in Vietnam but was deployed and then transferred to Malaysia – where he was employed with the US Airforce,” Abby said.

“He went to the border areas including Vietnam and he was over there for 12 months.

“It makes me sad to think about how young some soldiers were when they served and fought at war – lest we forget.”

“My great-great grandfather served in Europe during WWI and all my great grandparents served in WW2,” Ted said.

“I am also very proud to have family serving in the Australian Defence force today.

“My great grandfather was in the Royal Airforce Coastal Command during World War Two as a navigator and radio operator in a Wellington bomber Aircraft.

“During their missions they were regularly attacked by enemy fighters in the sky and also by shells from enemy ships that were in the water as they were flying by.

“Every night he and his crew would fly over the Atlantic Ocean as far as their fuel would allow – defending the convoy ships bringing food and medical supplies to allied forces including Australians in Europe.

“My great grandfather felt guilty about his part in the war and was only able to start to feel proud of this service when he was called a hero 65 years after the war had ended.

“I ask that you stop and take a minute to remember the brave people and everything they’ve done for us – lest we forget.”