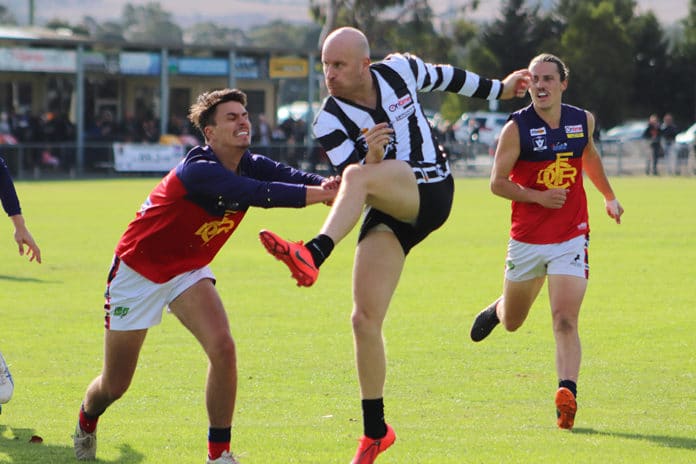 Wallan suffered its first loss of the RDFNL season, going down to reigning premiers Diggers Rest by 25 points at home on Saturday in a preliminary final rematch.

A close start saw the two sides trade goals early before Diggers kicked away to a 3.5.23 to 1.4.10 lead at quarter time.

Wallan was able to slow the Burras down in the second term as both sides kicked two goals apiece to keep the half-time margin to 15 points.

The Magpies were able to close the margin, kicking five goals in the final term but it wasn’t enough as the Burras kicked four of their own to hold off the hosts.

“The Diggers forward line was just a bit more efficient than ours in the first half despite both sides being inaccurate in front of the sticks,” he said.

“Diggers Rest had the better of third term and set up their win, we went onto win the last quarter but the damage was done in the third quarter, Saturday just wasn’t our day.

“Our better players were Andrew Saladino, Shaun Stewart and Ricky Schraven in the middle, Matt Perri was lively up forward while Tim Robertson and Brenton Cox did a good job down back.”

Wallan’s reserves had a win over Diggers Rest’s seconds who are also reigning premiers and Mathieson said several two’s players were putting pressure on some of the club’s senior players to a call-up to the firsts.

Wallan takes on Rupertswood next week in another test for the Magpies.