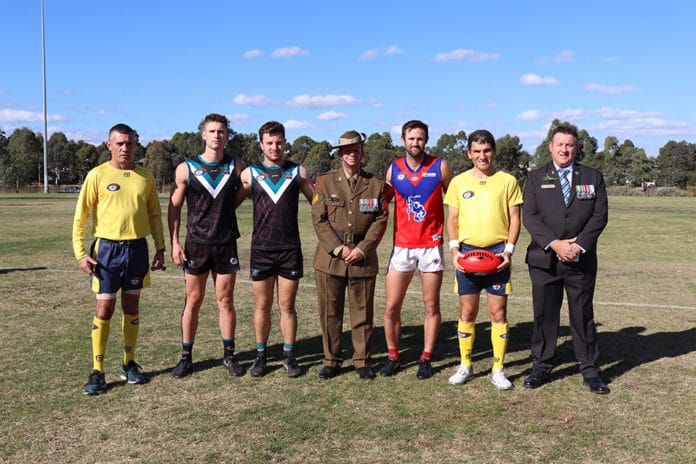 LAURIMAR hosted the first of what is hoped to be an annual Anzac Day match against local rivals Mernda and managed to escape with a four-point win after a strong Mernda comeback.

The day got underway with an Anzac Day service conducted by Doreen RSL president Wes Wridgway before Sergeant Lee Martin tossed the coin.

The day had a special atmosphere with strong support coming out for both clubs.

Laurimar president Alasdair Walker said the day went off without a hitch and feedback had been overwhelming.

“Everyone thought it did the day justice. We had all the things we were expected to have, the Ode to Remembrance, the national anthem and the RSL involved,” he said.

“Overall, I couldn’t be more proud of our guys for putting it together and for the community for supporting it.”

The club sold out of commemorative stubby holders on the day, with all proceeds going to the RSL.

Walker estimated a least a few hundred dollars were raised from the stubby holders alone while RSL volunteers were also rattling tins and selling pins.

“They showed a tremendous amount of respect for the day and what it means for Australians. Both clubs did an extreme amount of justice for the day so it was a credit to everybody.”

Once the opening siren blew, it was game on.

Mernda started well, kicking three goals to one in the first term to take an 11-point lead into quarter time.

A six-goal to three fourth quarter saw the Demons close the gap to four points but it wasn’t enough as the Power was able to hold on for the win at home.

David King kicked three goals for Laurimar and the Power spread the scoring with nine more goalkickers making the scoresheet while Joshua Delaney kicked five goals for the Demons.