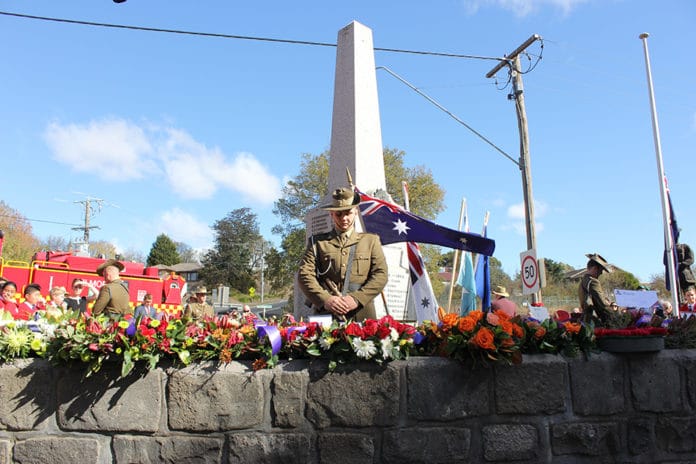 THE clouds cleared for the Anzac Day parade in Kilmore on Thursday with Puckapunyal’s School of Artillery, Assumption College, The Kilmore International School, Kilmore Scouts and Girl Guides leading the march on Sydney Road.

“We conduct this ceremony in remembrance of our history and our heritage as we know it now and we express our gratitude to those who made it,” Mr Dally said.

“When we first came back from Vietnam we didn’t get that sort of reception that our World War One and World War Two veterans received, but that’s in the past.

“We’re now all one again and we’re all comfortable in our skins being a Vietnam veteran.

“We respect the memory of those who fell in the wars we have taken part in the past years – it’s essential we keep that going through our children and their children to honour their memory of those people who gave us what we have today.”

“The men who originally forged the Anzac spirit understood the values of independence, freedom and fairness, and they possess the willingness to defend these with their lives – because freedom only survives if there are those willing to defend it – and that is the spirit handed down to us,” Cpt Holmes said.

After the ceremony Mr Dally told the North Central Review that he’d never seen a larger turn out for Anzac Day in Kilmore.

“It was an honour to be part of it. It’s an honour marching up the street in Kilmore and people are clapping and quite a few of them thank you. It really gets to you – it makes you feel you were worthwhile,” Mr Dally said.

Standing up for standpipes