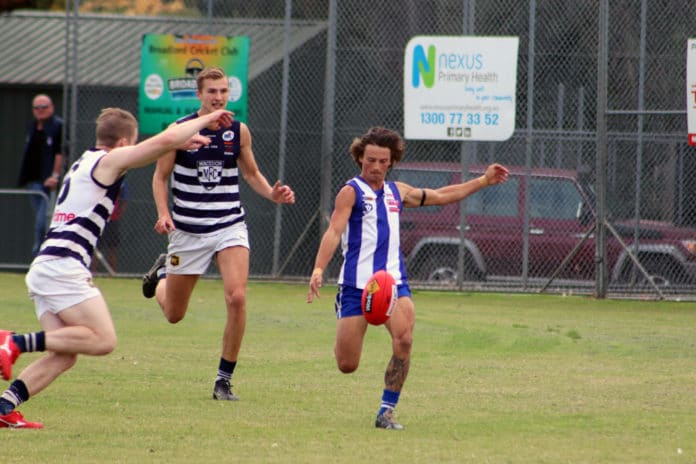 Broadford put in a decent showing against Macedon in a 94-point loss at home on Saturday but remain winless after two rounds of the Riddell District Football Netball League season.

The Kangaroos started well, kicking the first goal of the game and staying within striking distance of the Cats through the first quarter, only down 13 points at the first break.

The Cats ran away with the game coming out of the sheds for the second half, holding Broadford scoreless and kicking 8.6.54 to extend the lead out to 83 points.

The result no long in doubt, the Cats took their foot off the pedal and strolled home with a four-goal to two final term.

Jason Cooke was a nightmare for the Kangaroos’ defenders, kicking seven goals for the game.

Lancefield had a tough day at the office too, going down by 189 points to Melton Centrals away on Saturday.

The Tigers were behind the eight-ball immediately, as Melton Centrals kicked 8.6.54 in the first term and held Lancefield to just two behinds.

Lancefield was able to slow the bleeding in the second quarter, as Peter Connor kicked their first goal and the Tigers held Melton Centrals to just two goals to go into half-time with a 10-goal deficit.

The floodgates reopened in the second half, with Lancefield going scoreless and Melton Centrals kicking 5.11.41 to lead by 101 points at three-quarter time.

Melton Centrals piled on the punishment in the final term, holding Lancefield scoreless again while kicking 14.4.88.