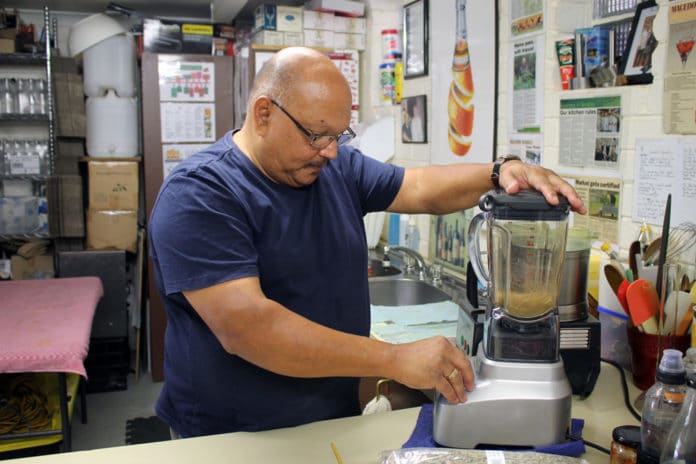 A Sri Lankan born Australian, he has worked in the food industry in both countries for decades learning extensively about various cuisines.

After selling his restaurant in Kilmore’s Town Hall in 2009, Mr Siebel was unsure of what he wanted to do next.

“We had a great following when we did curry nights at the town hall and I always used my recipes for things,” Mr Siebel said.

“I love cooking Sri Lankan food so I began to make curry pastes and named my brand ‘Pete’s Travelling Pans’. I started with six pastes and now have 25. I’ve also got about 12 different types of chilli sauces, pickles and chutneys that I sell online.”

Mr Siebel describes Sri Lankan food as a culmination of many cuisines.

“The genesis of Sri Lankan food is Indian food, almost all the spices came from India – it was a stop off from the old spice route,” he said.

“For 500 years the island was colonised by the Portuguese, Dutch and the British and they all had influences on the food.

“The Portuguese liked their food quite sour, so they added a lot of vinegar and tamarind. The Dutch added a lot of cinnamon and the British brought a whole heap of other things. The British to this day still seem to really like curries stemming back to Indian cuisine.”

For the past eight years, he has also attended regular local markets to sell his products.

“I do Woodend and Tallarook on the first weekend of the month, Kyneton and Eltham on the second, the third weekend I’m hoping to start some cooking classes and the fourth weekend I do Lancefield and Nagambie.”

Through his online store and markets, he hopes to educate people and promote the Sri Lankan cuisine.

“I’m trying to change the way people think about Sri Lankan food – it isn’t as well known in Australia,” he said.

“I want to show how good the street food is. I’m starting to make this food called Hoppers. It’s a fermented batter with coconut milk in it and you pour it into a pan. You swirl the pan around so you get this crispy outer and soft interior.

“Then you put your curry and other accompaniments in and then break off the crispy bits and dip it in – this is to Sri Lanka what corn chips are to Mexican food.”

He offers some tips on how to make a good sauce.

“The secret to a good sauce is good fruit (chilli) and if you like sugar put some in along with vinegar, water, salt and that its. From that you can add anything you want in it,” he said.

“I sometimes add dates and apricots so you get a chutney feel on the front pallet and feel the chilli at the back.”

In 2012 Mr Siegel’s daughters asked their father to take them on a trip to Sri Lanka for the first time.

“I hadn’t been home in over 25 years. I had worked in a lot of hotels over there and now my friends ran those hotels which gave me a lot of contacts,” he said.

“I thought I could take people over there and travel around Sri Lanka. I decided to start running 15-day tours which had three hands-on cooking classes – one on a beach and one in a garden.

“I do it once a year and provide people with an opportunity to experience the culinary and cultural aspects of Sri Lanka.

“I go in Australia’s winter. I love the idea of missing the cold weather and teaching people on a sunny, warm beach.”