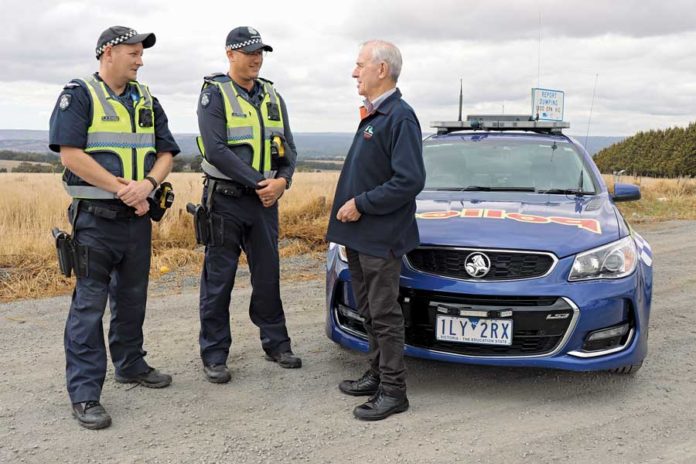 An already alarming road toll this year has sparked Wallan’s Highway Patrol and Roadsafe to encourage people to take extra care on the roads during the Easter and Anzac Day holidays.

Ninety people have died this year on Victoria’s roads with 59 deaths on regional roads.

This time last year there was 59 deaths across Victoria and 31 lives lost on regional roads – almost half the number of this year’s regional fatalities.

“I don’t know why that is, the weather isn’t really different, road surfaces aren’t any different and cars are only getting better,” Leading Senior Constable Debryuckere said.

Yet Wallan’s Highway Patrol has noticed a lapse in vigilance off the main roads.

“Drivers attribute high traffic and police presence to ‘I better watch what I’m doing’, but once they get out to quieter roads they relax a bit,” Leading Senior Constable Debryuckere said.

“The problem is people aren’t scared to die on the roads, they’re scared to lose their license.”

“We run initiatives like ‘Look after your mates’ which have been great for football clubs – you see them take extra care when it comes to drink driving,” Mr Callaghan said.

“One thing we have seen is a lot of is new mums not buckling children in their car seat or letting them sit in the front – we need to ensure they are protected.”

Senior Constable Joel Barclay said the top issues on the road centred on speed, drug and alcohol, fatigue and distraction.

“We have seen a massive incline on the drug to alcohol ratio being around 30:1. Kids think it’s a cheaper option,” Sen Con Barclay said.

“We constantly see people on their mobile phones, we now have officers at traffic lights notifying us of people doing this.”

Wallan police and Roadsafe urged drivers to remain alert and safe over the Easter break and ANZAC day.

“Just being aware of your surroundings and being vigilant. If it is wet, just take care. Try to eliminate the distractions in your car,” Leading Senior Constable Debryuckere said.