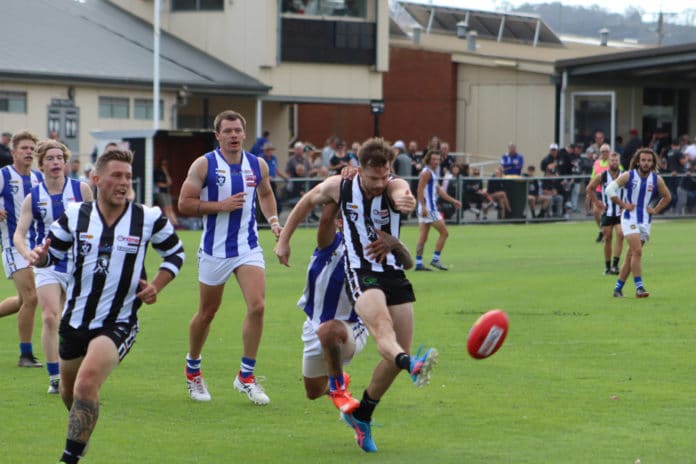 Wallan opened the Riddell District Football Netball League season on the right foot with a 112-point win over rivals Broadford at Greenhill Reserve on Saturday.

It was all Wallan in the second term as the Magpies held Broadford scoreless and kicking 1.5.11 to take a 23-point lead into half-time.

The floodgates opened for both sides coming out of the long break as Wallan kicked 7.8.50 to Broadford’s 4.6.30 to extend the lead to 41-points at the final change.

Having already built an almost insurmountable lead, Wallan smelt blood in the water and kicked 12.6.78 to 1.1.7 to put an emphatic cap on the first win of the season.

Callum Langborne and Luke Gallina each kicked two goals for the Kangaroos.

“In the second quarter, we controlled the game in our forward half but didn’t convert all our chances in front of goal,” he said.

“To Broadford’s credit, their first eight minutes after half time were very good but after that we controlled proceedings, kicking 16 goals to one.

“Our better players this week were Ricky Schraven, Michael Tang, Chris Barton, Will Brock and Corey Grindlay in the middle. Up forward, Nathan Fowler, Michael Mannix and Josh Barber gave the Broadford backline a few headaches.”