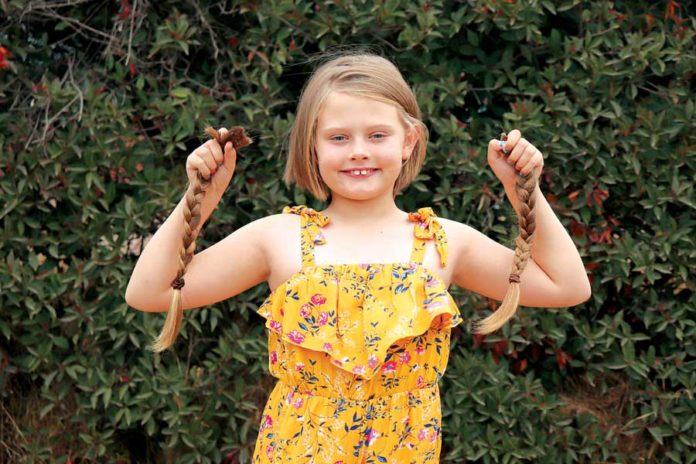 Wallan’s Mackenzie Fereday raised more than $2300 for Variety’s Hair with Heart initiative and donated her hair to help make wigs for children with leukaemia.

Mackenzie and her parents Mel and Michael Fereday originally hoped to raise $500 through friends and family but a groundswell of support saw them hit their target within two days.

On Friday, Mackenzie underwent the big chop and at 12pm – online donations had reached $1053 and, with help from Mr Fereday’s employer Cleanaway, another $1315 was raised through raffle tickets and donations.

Mackenzie said she was proud to be able to raise so much money.

“It feels amazing. I was a bit nervous because there were nearly 100 people watching. I love my haircut. I can brush it all by myself now,” she said.

A hairdresser donated her time and services while Casual Cuts Wallan donated a wash and blow dry to treat Mackenzie before the cut. Costco also donated morning tea and La Manna donated a hamper for the raffle.

Mel Fereday said the whole family was overwhelmed with the support.

“We didn’t think it was going to get this big. We thought it would just be friends and family,” she said.

Ms Fereday said the whole idea was to raise awareness for what Variety did for the families that need help.

“I just wanted to raise awareness for people out there that could be in a situation where their kids could be unwell to contact Variety,” she said.

“For those kids who could be in a situation like Mackenzie where they’ve got long hair and want to help, get onboard with Variety and look at ways at fundraising or donating hair if possible.”

Mitchell Shire is experiencing a pandemic baby boom, with births up...