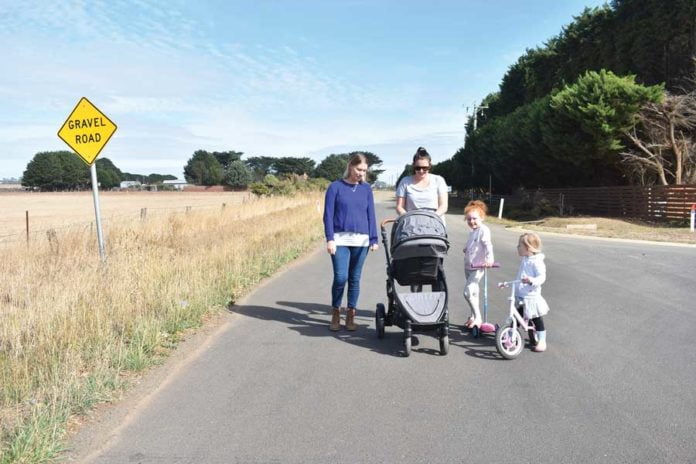 Residents are concerned for their safety when walking due to a lack of footpaths in Lancefield.

Mothers Anita McMaster and Bianca Rantall – who walk daily with their prams – said footpaths only existed one street from the middle of town.

“I walk every day to get out of the house, with the pram on the road. People don’t really want to move over for you,” Ms McMaster said.

“Some roads are 70km/h and it’s very stressful to walk along. I had to move to a baby carrier because I nearly got run off the road two weeks ago with my pram on McMasters Lane.”

Ms Rantall said she would feel safer if footpaths were constructed at least on one side of the main roads in Lancefield.

“Even for us to get to kinder, we’ve got to walk on the main street,” Ms Rantall said.

“We can’t even get to the park without walking on the main road with no footpath.”

Both women have noticed not just mothers and children putting themselves at risk to travel in town.

“I pass two or three prams walking everyday who are on the road, but we’ve also got a nursing home nearby and they are on their mobility scooters,” Ms McMaster said.

“It’s very dangerous for them to drive along the main road,” Ms Rantall said.

Macedon Ranges Shire Council Shire-wide Footpath Plan was developed after community consultations in Gisborne, Macedon, Riddells Creek, Woodend, Kyneton and Romsey in 2017 and 2018 – there was no session in Lancefield.

The plan is estimated to cost $15 million over 15 to 20 years, subject to funding.

Projects will be considered for future funding depending on the priority rating in each town.

Connors Road, Chauncey Street and High Street were considered high priority in council’s plan, but no details have been released.

Council said now that the budget had been increased for the footpath program, most towns would see at least some construction for footpaths every year.