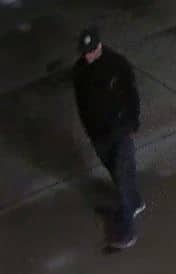 Investigators have been told an unknown offender scaled the roof of a Powlett Street business about 2.45am before accessing the shop and office areas.

Once inside, he allowed an unknown number of other offenders to enter the premises.

They then stole a significant amount of power tools, hand tools and car audio equipment before fleeing the scene in a vehicle.

Detectives have released images of a man who they believe can assist with their enquiries.

He is perceived as Caucasian in appearance and about 183cm tall with a slim build and distinctive walk.

The man was wearing a dark jumper and pants, runners and a dark hat with a white logo on the front.

It is believed the same man was seen loitering in the area about a week prior to the burglary.

Anyone with information or who recognises the man is urged to contact Crime Stoppers on 1800 333 000 or submit a confidential report online at www.crimestoppersvic.com.au