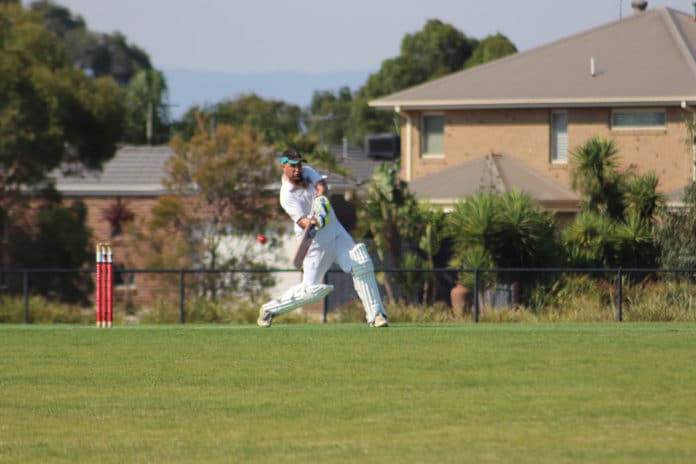 Playing down the road at Waterview Recreation Reserve in Mernda on Saturday, the Power were sent into bat by the Collegians and bowled out for 145 after 64.5 overs.

A rough start saw Laurimar fall to 2/23 early, with the wickets captain Jake Zerella and Daniel Roberts both taken by Jack Sassella on his way to a team-best 4/40.

Opener Ashley Williams and Andrew Nicholls were able to stem the bleeding, albeit slightly, before Williams also fell victim to Sassella, caught behind for 21.

Nicholls took on the bulk of the scoring, leading the side with 27 and putting on a 32-run partnership with Rian Boddy (9) before both were also caught behind in quick succession to have Laurimar 5/73.

Wickets fell with regularity through Laurimar’s middle order, with the side 8/106 before Steven Mitchell (21) and Michael Peters (10) put on 23 runs.

Tailender Chris Marienfeld chipped in with 13 before his wicket was the last to fall.

With 15 overs left in the day, Research Eltham Collegians were able to make 53 without loss before stumps.

Lander followed up on his great innings behind the stumps with 35 not out.

Laurimar captain Jake Zerella said while his side got off to a rocky start, the lower order batted well.

“We batted pretty well through the lower order to get to 145 and give ourselves a shot,” he said.

“Steven Mitchell did a really good job with the bat to help get us to that total. Obviously it’s not the best spot to be in and it’s going to be a pretty tough job from here to get the win, but we’ll see what we can do anyway.”

Despite having a relatively small total to defend, Zerella said he would back his bowlers in.

“We’ve definitely got the bowlers to get the job done. We’ve got a good bowling line-up and with our spinners, we’ve got the line-up to be able to run through a side,” he said.

“We’re by no means out of it and it’ll be a tough task but I’ll back the boys in to do it.”

COVID-19 testing sites set up after exposure sites in Sunbury