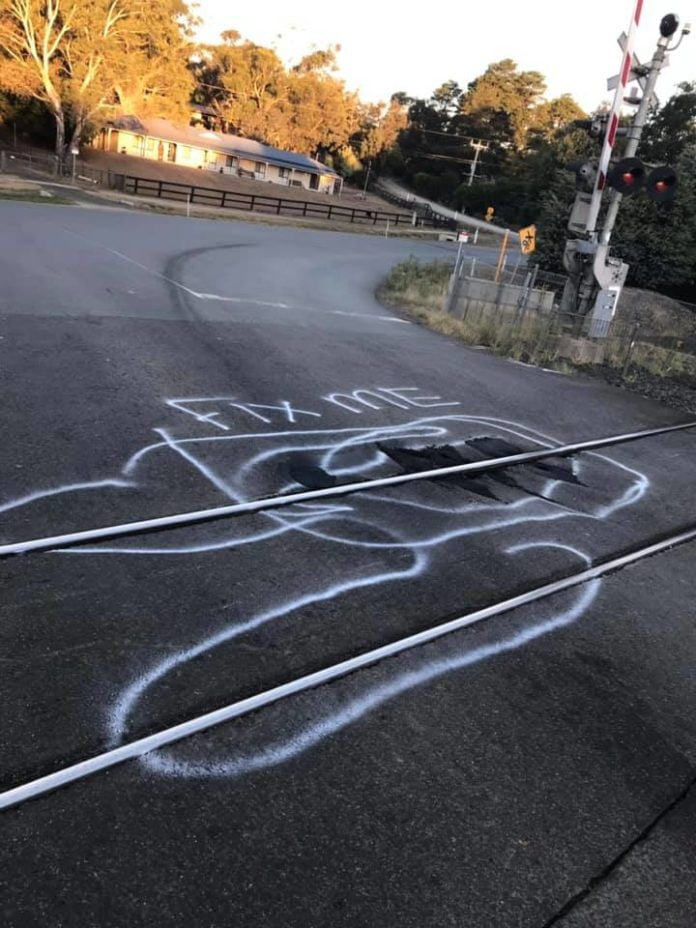 An amusing approach requesting several potholes to be fixed in Heathcote Junction has eventually made its way to the correct road authority.

A Facebook post attracted a lot of attention from Mtichell Shire residents depicting several large potholes and bumps in the road crossing a railway line.

The social media attention was enough for Mitchell Shire Council to make an official statement after several people tagged them in the photo.

Resident Jamie Dennis came across the railway junction with several potholes outlined with white paint and the words ‘FIX ME’ written above the damaged area.

“I took the photo while I was out walking,” Mr Dennis said.

“When I first saw the paint job, my first thought was – I’m not the only angry resident, and then I thought – I’ve got to post this and get community support to have this fixed, enough is enough!”

Mr Dennis posted the photo with the caption ‘The town has had a gut full, fix the hole!’

“So does my Ford Territory,” posted another resident.

Mitchell Shire Council responded on social media saying council have been made aware of the road issues.

“This particular location is not one that we manage, however we have forwarded this ‘informal complaint’ on to the relevant authorities to review,” a Mitchell Shire Council spokesperson said.

“This is one way to highlight an issue with roads, but not exactly advisable.

“If you see a location that has significant damage that you’d like to inquire about in a meaningful way, we are happy to hear from you.”

“ARTC is looking to complete works as soon as possible,” a spokesperson said.

“If community members wish to raise a maintenance concern with ARTC, they can contact ARTC’s enviroline on enviroline@artc.com.au or 1300 550 402.”