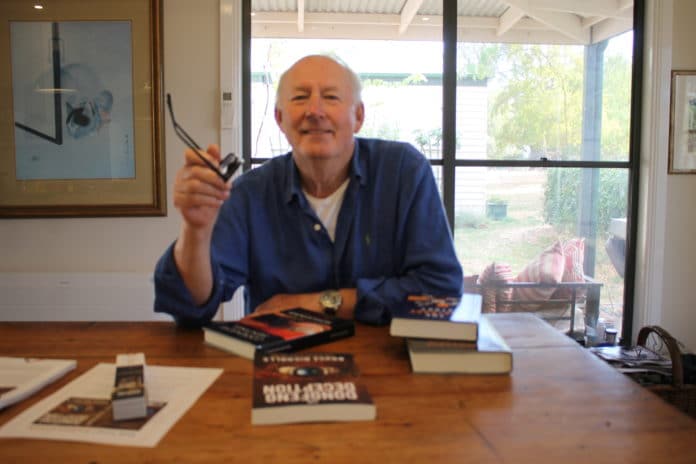 Bruce Nicholls is a man of varied accomplishments.

Serving in Australia’s Foreign Service for nearly two decades with postings in India, Germany, Switzerland, China and Hong Kong, he returned to Australia in the 1990s to continue in the corporate world on the boards of several public and private companies.

His latest venture however is in stark contrast to his world of trade and politics, with a move into creative writing.It all started one night over a glass of wine reflecting on memories throughout his career.

“Once I’d left the service, just for fun at night I’d sit down with a glass of wine where I’d look through personal diaries of my time overseas and I ended up writing my first book called A Briefcase in Transit,” Mr Nicholls said.

“It was all humorous anecdotes from my time as Trade Commissioner.”

But it wasn’t until Mr Nicholls met with a literary agent that he gained a flare for fiction.

“She said ‘with all your experience in the foreign service you need to write a spy novel’,” Mr Nicholl said.

“So I wrote Code Name: Sentinel that won the North Central Review’s literary award in 2012 – that award really kick-started my career in fiction writing.

“I’ve just released the second instalment in this trilogy The Dongfeng Deception that is set in the US.”

Mr Nicholls uses not only his experience in trade relations but heavily researches current developments for his novels.

“To make fiction credible you need to use a lot of facts.

“You think you know where you are going with a book but then you research and it takes you in another direction,” Mr Nicholls said.

“My wife Annie and I went off to a villa on the west coast of Bali to write my last novel.

“I started at 4pm in the afternoon with a bottle of Cognac sitting under a palm tree with the waves crashing –at 4am I finished writing 20,000 words.”

Mr Nicholls is busy writing his third book in the trilogy focusing on the future of China.

“China has been a very big part of my life, I lived there and have sat on many boards that invest money back into China, but I’m concerned about where they are headed,” he said.

“I have googled human rights abuse in China and have some foreign agents come into my computer screen – I’ve had to throw computers and buy new ones.

“There are minority groups in western China who are in detention camps and are working under forced labor – I want to look into this.”

Mr Nicholls reflects on the changing nature of his career over time.

“It was difficult moving into creative writing because I’d previously written dry, objective pieces for my work,” he said.

“But I’m enjoying this phase of my life where my wife and I can travel to an exotic location where I can sit down and get a burst of creative energy.”