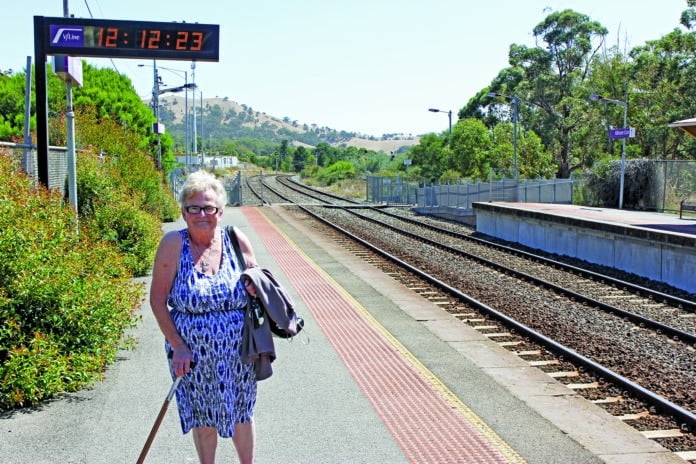 AN independent, non-partisan advocacy rail solutions group is calling on the State Government for timely completion a diversion project on the Upfield metropolitan train line in order to relieve pressure for regional trains.

Rail Futures Institute says a proposed Upfield diversion project will reopen and duplicate unused lines for regional trains but needs to be completed before or at the same time as the new Metro Tunnel project.

Train services on the Seymour line are in focus, with two rail petitions presented to State Parliament last week calling for the upgrade of railway services in the region – focusing on the Seymour and Shepparton lines.

Rail Futures Institute president John Hearsch said amid forecasts of a ‘massive’ population growth between Mickleham and Wallan by 2036, his group spoke to the Mitchell Shire Council mid last year about practical solutions to relieve pressures on the Upfield train line.

“Once the new Metro Tunnel project is completed, available slots between suburban trains will be difficult – it will relieve pressure on the underground loop but congest regional trains,” Mr Hearsch said.

“In order to relieve pressure on the Craigieburn line to ensure paths for regional trains, this Upfield diversion is a very important project that needs to be finished at the same time or earlier than the metro plan scheduled for 2025.

”Ethos Urban director and former Senior Government bureaucrat Tim Peggie said supporting the diversion is important for relieving congestion and improving punctuality on the Seymour line as well as providing greater access to jobs and services.

“The Craigieburn line has much greater frequencies and particularly in peak hour regional trains are competing for space. If a regional train is slightly delayed and misses its slot it is then caught behind next the train resulting in further delays.

The Elms Retirement Estate Village resident Shirley Perkins said she often travels during off-peak times on the Seymour line and is happy with the service.

“I travel to and from the hospital on the train and find the staff very friendly and accommodating,” Ms Perkins said.

“Last time I had to wait 15 minutes because the train got delayed, but it didn’t bother me.”

Seymour Train-Line Action Group member Shaughan Ristuccia said she had been using the Seymour line for more than 10 years.

“I couldn’t be more disappointed with how far the service has gone downhill. When I first started taking it, services were always on time and seating was always available,” Ms Ristuccia said.

“Nowadays the line is plagued with constant lateness, overcrowding, shortage of carriages and carriages with non-functioning elements (toilets, air conditioning, doors not operating on carriages).

“It just makes for a horrible experience for regular travellers and I hate to think of people who have strict jobs to go to.”

Ms Ristuccia hopes the petition gets serious attention from the State Government rather than being provided band-aid solutions.

“There is about to be a whole lot more land opening up with a lot of people moving to this area and the infrastructure will not be able to cope,” Ms Ristuccia said.

“I personally believe they need to fast track to the electrification to Wallan project that was part of the metro four stage plan.”

The Herald Sun reported on Friday that a technical mistake by the Andrews Government has meant that new regional trains have been built too heavy for the tracks they run on.

The government allocated more than $300 million towards 39 new VLocity carriages, but staff receiving orders from Bombardier noticed the first trains were overweight.

Engineers are in the process of stripping back the trains to adhere to guidelines.

The petition calls for new trains, increased services, a fairer pricing system and track works to improve or be replaced.

Member for Euroa Steph Ryan also wanted action from Ms Horne relaying firsthand accounts on the Seymour Line and wanting to know when new trains will be delivered.