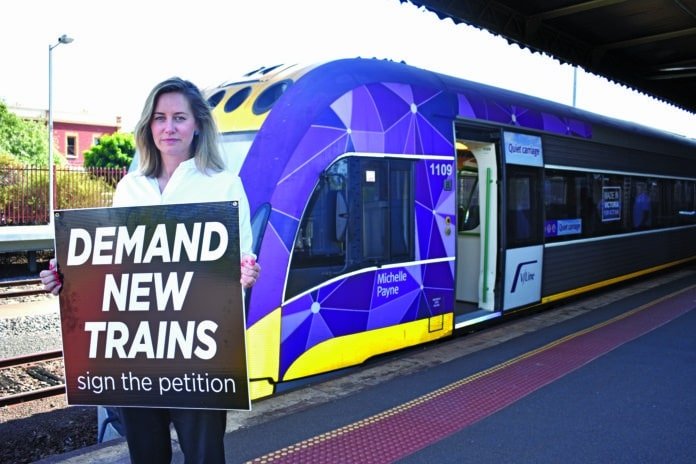 Member for Euroa and Shadow Minister for Regional Public Transport Steph Ryan has launched a petition calling on the State Government to replace all rolling stock on Seymour and Shepparton rail lines.

A second petition, by Seymour Train Line Action Group, contains 1112 signatures, and will be presented to Parliament on Thursday.

The petition outlines gaps in services between 9am to 1pm to Melbourne, especially for passengers travelling from Wallan and Donnybrook.

The petition also calls for upgrades to signals, some which are 100 years old and require the station master to manually change at Kilmore East.

The group is calling for more carriages and more services during the day and after the 7pm.

Ms Ryan said a lack of services had been an ongoing issue with the Labor Government delaying the roll-out of rolling stock since 2016.

“We see the Andrew’s plan to open 50,000 new lots to the south of Kilmore but they are doing nothing to the train line. The people living there will need to rely on the Seymour train line.

”Ms Ryan said she has been inundated with stories of commuters who have missed trains and opportunities with work and family.

“I’ve had a couple of people who have told me that they’ve had to quit their job in Melbourne because they keep turning up to work late,” Ms Ryan said.

“One man missed saying goodbye to his mother when she passed away because he was supposed to get a flight out of Tullamarine to Newcastle and the train broke down, or got stranded, for a couple of hours and he missed his flight.

“We have terrible reliability on our line because the trains break down so frequently. If we could get rolling stock that didn’t break down this would greatly improve.

”Ms Green said she was focused on responding to the community.

“I’m looking forward to tabling this community led petition in support of services to the Seymour line,” Ms Green said.

“I’ve got a strong record of delivering improvements to infrastructure and service as seen with South Morang and Mernda.”Member for Northern Victoria and Regional Development Minister Jaclyn Symes announced last week there would be upgrades to the Shepparton rail line.

From April 1, there will be 10 extra weekly services at Shepparton Station and the extension of an early morning Seymour train.

Two extra weekday trains have also been added – one mid-morning and an afternoon peak service train between Melbourne and Seymour.

“Local passengers have been calling out for more train services and we’re delivering exactly that, giving people more choice when they travel,” Ms Symes said.

“With the next stage of works now progressing, passengers have even more to look forward to, with more modern trains and more reliable journeys on the way.”