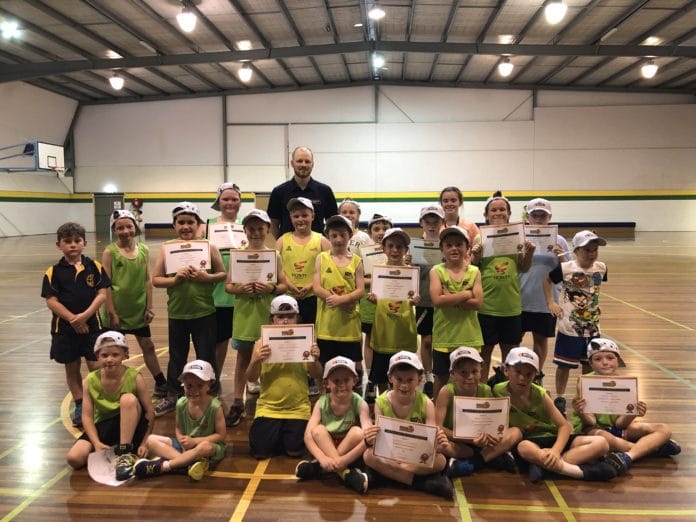 MITCHELL Shire’s aspiring basketballers might soon have another place to hone their skills with a junior basketball competition in the works for Broadford.

Following on from a successful Aussie Hoops program last year, Basketball Victoria Country development officer Hayden Annett hopes to get the competition off the ground for term two.

“We targeted Broadford because the association hasn’t been running for some time now, there’s a nice facility up there and most importantly, there are kids that want to play,” he said.

The response to the first Aussie Hoops program was overwhelming with about 35 children participating when only 10 were expected. Mr Annett hopes to move some of the participants into competition-based basketball.

“They get something out of it every time. With the kids 12 and under, there are some kids who are new to basketball so we want to make sure we’re teaching them, not just throwing them into a game setting,” Mr Annett said.

With Broadford located between the Seymour and Wallan competitions, the new Broadford program is set to run on Wednesday nights to avoid clashes.“In the area, Seymour’s domestic night is a Tuesday whereas Wallan’s is a Saturday and not every family can do that,” Mr Annett said.

“Being a Wednesday night, we thought we could get a few more people who want to play basketball but they also have football commitments or something like that so it’s really important to us to find our own night.”

Before receiving expressions of interest, Mr Annett said there were already about 15 young ballers ready to come up from Aussie Hoops and play.“Hopefully we can grow that to 30 or 35 and get five or six teams running around. We’ll start with 12 and under for kids anywhere between nine and 12, then as we go forward, in future years, hopefully expand it to more age groups,” he said.

Mr Annett said that now was the ideal time to get the Broadford competition up and running, with basketball experiencing a massive boom. “Basketball in Australia is huge at the moment. With the success of the guys in the NBA and the USA coming out here next year, I think it’s a really good time to start programs like this because basketball’s on TV a lot now so kids want to come to the sport, which is great,” Mr Annett said.