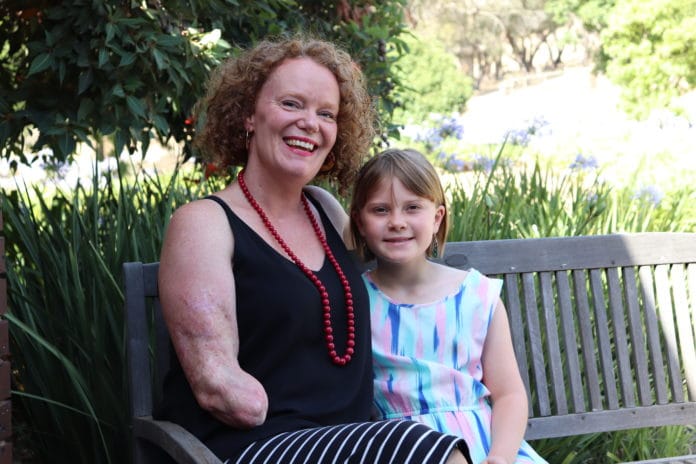 ONE of Mitchell Shire’s most inspirational people was honoured by being named the Access and Inclusion Champion at the Australia Day awards ceremony in Seymour on Saturday.

Since losing both arms and both legs to sepsis on 2013, Mandy McCracken has devoted her time to support the disabled community both locally and internationally.

With the help of Nexus Primary Health, the Kilmore East resident started the disability support group My New Life.

Ms McCracken said the group’s aim was to provide people living with physical disabilities a place to get together.

“When I came home from hospital with my new disability, I found there wasn’t anyone else I knew in the area who was dealing with similar sort of stuff,” she said.

“There are all these little nuances to living with a disability that I’d never known of.

“Things like which car park is the best when you go shopping, what’s the best café to get in and out of in a wheelchair and how to access support services locally.”

After the initial My New Life program finished last year, Ms McCracken has looked into how to continue it in future with hopes it could eventually spread throughout the state.

As well as supporting locals with disabilities, Ms McCracken started a support group for quadruple amputees like herself on Facebook.

It began with three Australian members and has grown to 180 worldwide.

“Now I find that anytime somebody goes through the hospital system and ends up as a quadruple amputee from sepsis, somebody will know someone who will get in touch with us and ask if we can get on the phone with them and help them through it,” she said.

“It’s actually turned into this massive network of all these people out there that are living the same sort of lives that we are.”

Ms McCracken said she was grateful to the community in Kilmore and across the Mitchell Shire for its support.

“Everybody in Kilmore and the surrounding areas has been incredibly supportive,” she said.

“Right from the first day I got sick, they supported us from a family and I think the beauty of living in regional Victoria is you get that support and everybody knows you.

“It’s a lovely surprise to be given an award like this. It’s really nice to get a pat on the back for the stuff that I’ve been doing, not that I need the pat on the back but I appreciate it.”