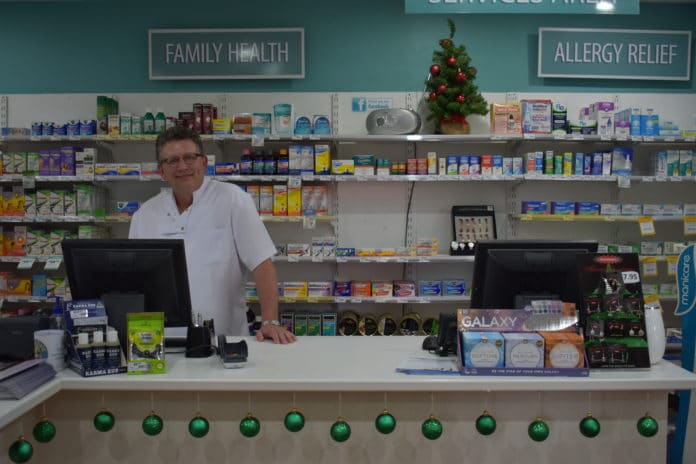 LANCEFIELD Pharmacy received an early Christmas call last week, when a would-be thief got stuck in their chimney early on Monday night.

Co-owner Greg Gibson received a call at 9:30pm when the alarm sounded but assumed it was a fallen item or mouse.

“Sometimes there are people coming home early from the pub who throw something through the window, so I thought I should check it out just in case.”

Mr Gibson, who lives in Macedon, drove down to the pharmacy but found no notable evidence of forced entry or damage.

“As I was passing the back I saw a backpack and thought someone may have left it behind,” he said.

“I thought I’ll just go inside and lock the place up, but something said to me ‘phone the police’.”

As the call required no urgency, Mr Gibson was told to wait about an hour for police to arrive.

It then came as a surprise to him when loud sirens began to emerge.

“I sat out the front on the steps, just browsing my phone when an ambulance arrives, followed by a fire truck and then a cop car at high speed” he said.

“I said, ‘You guys must be confused, there’s just some evidence here that they need to pick up’.”

The police then informed Mr Gibson that there was a man stuck inside the pharmacy chimney.

“I couldn’t believe it. I knew he couldn’t get out, we’ve built it in at the bottom,” Mr Gibson said.

In desperation, the would-be thief broke through the bottom shelving and slipped his way into the store.

“As we get to the front door with six of us, this bloke appears inside covered head-to-toe in soot,” he said.

“He looked utterly embarrassed and then the paramedic asked him, ‘Hey mate are you practicing for the 24th?’”

The 22-year-old complained of back pain and the inability to see due to soot in his eyes.

Mr Gibson believed the story could have ended much worse for the robber.

“I did a little bit of reading and the way you die in a chimney is that your knees end up compressing your chest,” he said.

“So this obviously was a really big issue for him as he was trapped at the bottom of the chimney.”

“He had a full black suit on, a balaclava and sophisticated rock-climbing boots. So he was ready to go down the chimney.”

“He came in a very good four-wheel drive and had a brand new phone, so I think people who do this kind of thing are actually quite wealthy people in a true economic sense.”

Unfortunately for Mr Gibson, this isn’t the first time he has had to deal with break-ins.

“Prior to this, we had a spate of burglaries – I think we had three in a row about two years ago,” he said.

“The thing that really annoys all pharmacists, is that when this happens our premiums goes up. That’s why we are sitting in a prison here with solid metal doors.”

“It’s rather sad that people think they can do this without a serious consequence.”