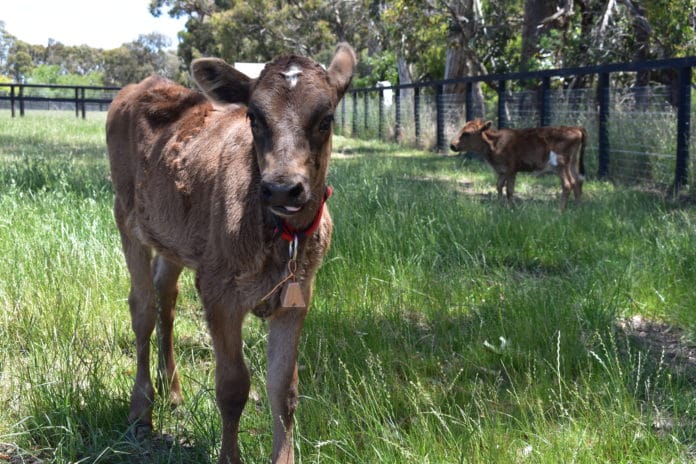 WHEN Babe the calf arrived at Edgar’s Mission Farm Sanctuary a couple of weeks ago, her future looked bleak.

Blind, malnourished and unable to stand, the staff were doubtful that she would make it through the night.

Edgar’s Mission Founder and Director Pam Ahern said Babe touched the heart of a vet nurse working on a dairy farm in northern Victoria – she knew that working life would be tough for the little calf.

“She called us, and we took her in knowing how difficult it would be for her to navigate her world,” she said.

“We rescued another little baby calf Sophie, who wears a bell so that Babe knows where she is – they are best buddies.”

Pam is continuing to nurse the two friends back to full health but understands that there are many more beyond her reach.

“People don’t realise that baby calves are taken off their mothers and most of them are killed in their first week of life because they’re surplus to the needs of the industry,” she said.

“That vet had somewhere for her compassion to go, and if we couldn’t take that calf, not only would the calf have died but part of her compassion would have shut down to what was happening to these animals.”

Ms Ahern’s work with animals began in 2003, when she rescued a pig named Edgar.

The gentle giant stole her heart and inspired her drive for change.

“My calling was to be an advocate for animals, it’s all worth it seeing the change with the animals here,” she said.

The farm is set on 153 acres near Lancefield where staff and volunteers rescue and provide sanctuary to over 450 animals.

Edgar’s Mission offers farm tours, education and outreach opportunities to expand the circle of compassion for all animals.

“We never tell people what to do or what not to do, but I truly believe in the goodness of the human heart,” she said.

As her favourite rooster perks on her shoulder and the farm Kelpie sits be her side, Ms Ahern believes that by visiting the farm and educating yourself on animal welfare, it inspires people to be better versions of themselves.

“Just simple choices that we can make in life really can impact animals like these baby calves.

Little Babe was lucky because someone saw her for who she was,” she said.

Fellow volunteer Merryn Sinclair has chosen to abandon the corporate life to work at Edgar’s Mission a couple of days a week.

“Some animals come in a terrible position, a few weeks later you see them playing with their friends and you think how wonderful,” she said.“

As soon as I walked in the door here I was in awe of the place. I think that’s what clicked in my mind and realised what I want to be doing with my time.”

Wallan church goes on its way