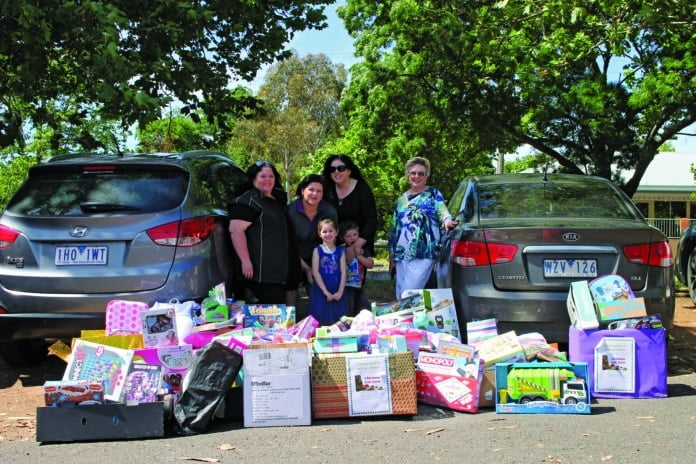 JUST in time for Christmas, Pyalong Neighbourhood House has received another donation for struggling farmers.

Goodstart Early Learning Heidelberg donated nearly 200 presents to the cause which started when children from the centre saw footage of starving animals on the news and started asking questions.

Goodstart Early Learning Heidelberg centre director Malanie Smith said educators have been talking to children about farm life and what they can do to help.

“We talked about how we could help and the children wanted to get food for the animals but obviously that’s happening a lot throughout the country so we started to donate some food for the families,” she said.

“We did that a few months ago now and we decided we would continue it and look at Christmas for the children because our kids in Heidelberg are pretty lucky with what they get.

“We had a Christmas party last week so families came in to enjoy Christmas with their children and all of us and part of that was to donate a present to those less fortunate. It’s  really beautiful feeling to be able to do that for those who won’t have the kind of Christmas we will.

”As the children have been learning about farming and where their food has come from, they’ve drawn pictures to go with the donated hampers to thank farmers.

“They’re understanding where this is coming from and why we’re doing what we’re doing and that’s the most important lesson, they’re learning empathy,” Ms Smith said.

“People forget that farmers work from daylight to dark and I know the Neighbourhood House and everyone that’s contributed have been accredited with saving at least three farmers’ lives,” she said.

“Part of the problem is they think nobody knows, nobody cares and whatever we can send up lets them know people to care.”

While Pyalong Neighbourhood House closes for Christmas on December 15, donations will still be picked up everyday from the Pyalong General Store.

Aboriginal gathering place approved for City of Whittlesea will embrace anyone...

Support packages for those in need