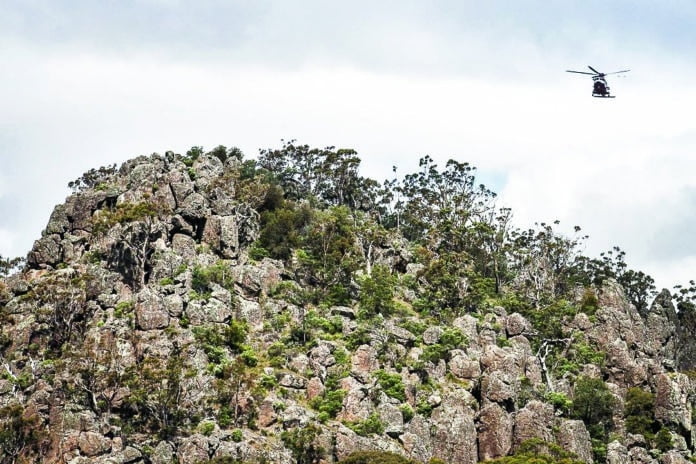 PARAMEDICS were called to the Hanging Rock Summit on Sunday December 2 to assist a man in his fifties who had fallen from the summit area of the rock.

It is believed the man suffered an ankle injury from the fall.

Ambulance officers assessed the man on-site and made the decision to winch him from the area via air ambulance.

The patient was flown to The Alfred Hospital in a stable condition.

The summit walk was closed for approximately one and a half hours so that ambulance officers could attend to the incident.

Photographer Kathy Mexted, who is a nearby resident, managed to capture the moment the ambulance helicopter hovered over the summit.

“I saw them arrive and circle the Rock about four or five times before going in to winch the medic down. They then cleared the Rock to circle for about eight to ten minutes before returning for the retrieval,” Ms Mexted said.

“I was impressed by the handling skill of the pilots in such strong winds.”

The summit walk was reopened once emergency services had cleared the area.

Therapy goes to the dogs