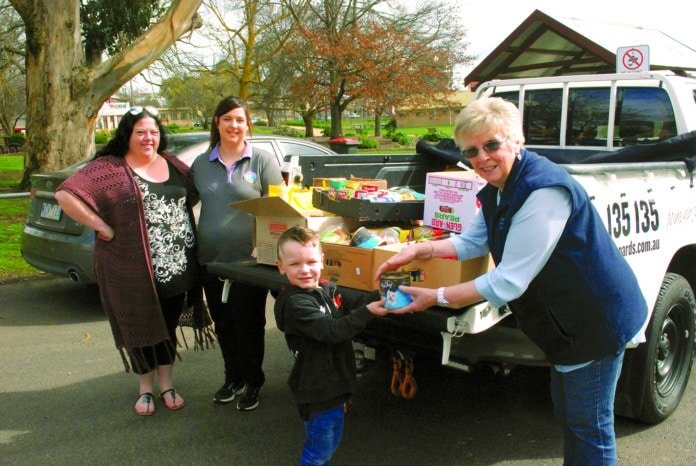 PYALONG is a small town with a big heart. The town with a population of under 2000 is driving the drought relief drive through the Pyalong neighbourhood House.

The Neighbourhood House has teamed with Need for Feed volunteers and the Cobram Barooga Lions club to ferry much needed supplies to drought stricken farmers to the north.

Neighbourhood House president, Moira Waye told the North Central Review that the efforts were being carried out by a 100 per cent volunteer task force.

“There are no overheads, time, vehicles and fuel are al being donated so 100 per cent of the effort goes to the farmers,” she said.

So successful has the Pyalong drive been that donations are coming in from Melbourne’s northern suburbs and from neighbouring shires.

Donations of food and household items have come from Kinglake East Uniting Church, Kilmore’s Marie Williams kinder, Seymour East and Wandong kindergartens, Goodstart Pre-school in Heidelberg as well as many other individual donations from community members.

At the weekend Need for Feed volunteers from Cobram called in to the Pyalong Neighbourhood House and left with two crew cab utes and a tradies trailer filled to capacity.

On last weekend in August, Need for Feed despatched a convoy of 90 trucks, plus many other vehicles, filled with hay, pellets, molasses, calf and lamb milk powder, glucose, chicken feed, salt blocks, boots, hampers, and care packs, which were delivered to  families from Dubbo to Tamworth.

“They actually had 1500 families on the books when they started out and managed to help 400 families on this trip. On the return trip home there was 2500 registered – that’s how bad things are up there,” Ms Waye said.

Next trip will be to East Gippsland on September 15 and 16, along with another into New South Wales at the end of September.

The generosity of local people continues to impress with the continuing flow of items being dropped off at the Neighbourhood House and at the North Central Review office in Kilmore.

“I am not ashamed to say that at times I have been brought to tears with the generosity of the community – everyone has been so supportive,” Ms Waye added.

Candidate wants governance back on track