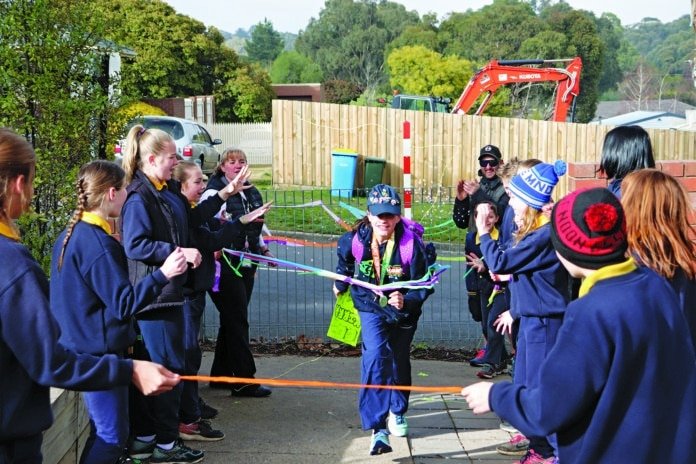 Kirra said she was shocked when she realised she won and sang to herself while she ran to help get her through the race.

“I was singing Eye of the Tiger because it got me motivated to get to the finish line,” she said.

“I was very excited when I won. I couldn’t wait to get back to school.”

Kirra’s mother Kylie Portelli said she was still coming to grips with her daughter being national champion.

“I wasn’t expecting any gold medals. I just told her to go out, do your best and have fun, that’s all that matters,” she said.

“She was really determined. She said she wanted to do it for Wandong and that was all that was in her head as she was running.”

Kirra was welcomed back to Wandong Primary School with a ticker tape reception, with students lining the path all the way from the front gate to her classroom and showering her with confetti.

She also went around to classrooms to tell fellow students about her trip and the race, had a Q&A session and a special assembly to recognise her achievements.

“It’s been fantastic the response we’ve had from parents, kids and the wider community getting behind Kirra,” she said.

“All the donations people made to help send her up there certainly paid off and we look forward to watching her in the future and no doubt she’ll be in the Paralympics soon.”

Private heritage-listed garden in Macedon to open to public for two...