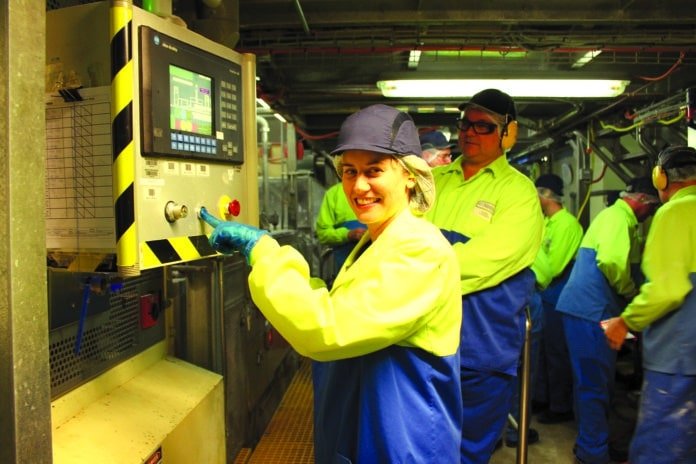 BROADFORD is seeing an employment boost with the Nestlé factory moving to 24 hour operations five days per week.

The expansion comes on the back of the success of Allen’s range of classic favourites, personalised products, gifts and limited edition sweets. The factory is the largest private employer in Mitchell Shire

The factory produces favourites such as Snakes Alive and Party Mix, as well as nostalgic lines such as Green Frogs and Spearmint Leaves.

Member for Euroa, Steph Ryan, officially pushed the button to start a third shift at Broadford on Monday August 6.

She joined factory manager Vince Giovanniello and workers at 11pm that night to celebrate the creation of 15 new jobs.

“From now on, the factory will run 24 hours a day which is sweet news for Broadford. The decision to extend the Broadford factory from two to three shifts has boosted employment,” Ms Ryan said.

The new jobs brings total employment at the factory to 275.

Factory manager Vince Giovanniello said that he was proud to see the company supporting local jobs and local manufacturing.

“It is great to bring more people in to join us in the sweetest jobs in Australia. We produce 240 million snakes a year here at Broadford. Head to tail they would make a line 36,000 kilometres long, enough to wrap around the moon three times,” Mr Giovanniello said.

Contributing to the statistical Olympics Ms Ryan added that the factory produces enough Party Mix to fill an Olympic size swimming pool each year and the equivalent weight of four full grown African elephants in raspberries.

The Broadford factory is located close to the Hume Freeway, where new housing estates are continuing to be developed.

“As the population of Broadford and other towns in the northern growth corridor increase, so too does the demand for employment. Nestlé is taking a big step towards meeting some of this demand.” Ms Ryan added.

“As Broadford’s population grows, so too does the demand for employment. Adding an extra shift to run 24 hours helps meet some of this demand.”