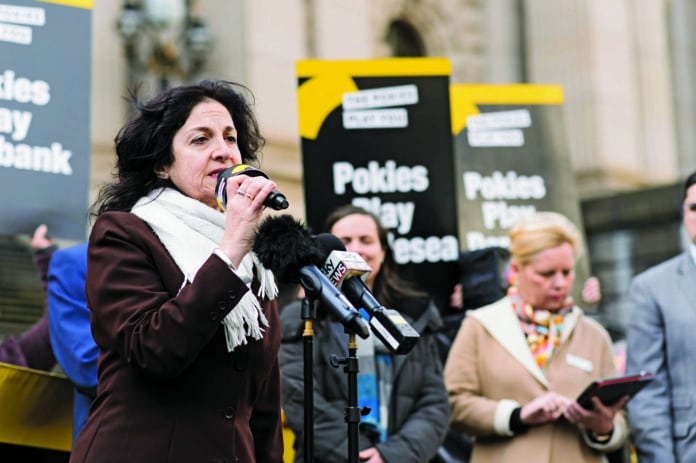 CITY of Whittlesea Mayor Kris Pavlidis has joined mayors from five other metropolitan councils to publicly launch The Alliance for Gambling Reform’s policies.

The Alliance, formed by Tim Costello, wants maximum $1 bets at poker machines, to reduce maximum operating hours to 14, reduce daily cash withdrawal from $500 to $200 and to strengthen the duty of care for venues and staff to prevent customer harm

Cr Pavlidis said Whittlesea residents would lose a massive $36million to the pokies between now and the election.

“Our councils are dealing with the dire consequences of pokies.
As community leaders we are standing together to make sure pokies reform is a key state election issue. Enough is enough.

“As Mayors we are putting all political parties on notice that it’s time for pokies reform. Our communities are suffering from gambling harm and it’s only getting worse.

“As community leaders we want reform. We call on the state government and opposition parties to commit to $1 maximum bets, clamp down on losses disguised as wins and reduce venue opening hours.”

“Councils such as Whittlesea are at the coal face of gambling harm and I sincerely welcome the commitment of Cr Pavlidis to the cause of fixing this blight on Australian society,” he said.

“Councils are at the coal face of gambling harm and are not conflicted by the tax revenue or intimidated by an industry which has exerted way too much power over our major political parties, leaving Australia with the largest per capita gambling losses in the world.

“Whittlesea is joining with other councils to say ‘enough is enough’ – as the local government sector unites like never before to demand action from our political leaders.”

Whittlesea Council has launched its Pokies Play Whittlesea campaign and is seeking 10,000 supporters to its online petition in the lead up to the election.