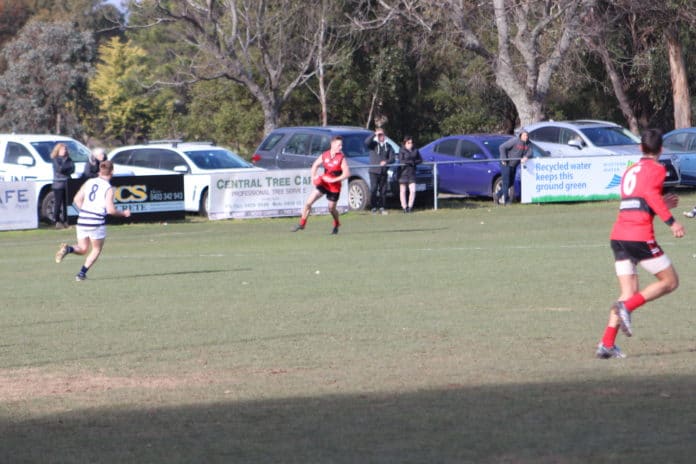 The win brings the sixth-placed Redbacks closer to overtaking the Cats for the fifth spot with three rounds left in the season.

Romsey utilised short, accurate kicks to work its way up the ground throughout the game.
It was a slower start as both teams felt each other out, with three goals kicked between the two teams in the first quarter as Macedon took a four point lead into the first change.

The heat was turned up in the second term as the Redbacks kicked five goals to three to wrestle back the lead from Macedon.

Romsey was able to extend its lead in the premiership quarter, kicking another five goals to three to take a 17-point lead into the final break.

The Redbacks held the Cats goalless while kicking four goals of their own in the final term to seal the win.

Romsey coach Corey O’Sullivan said the key to his side’s win was contributions from all 22 players.

“It was definitely [one of our best games] in the sense that everyone was able to stick to the task. We understand Macedon had a couple key players out but you still have to be at your best to beat these top sides and that’s what we got,” he said.

“We just tried to deny Macedon the ball until we could find the right option to utilise our tall forwards.

“I was really happy with our defence, it was a major part of our game. I said at three-quarter time it was a game we needed to win and not save so to get the job done was really pleasing.”

While most teams will enjoy a break during the second half the split round, the Redbacks will take on Diggers Rest this Saturday to make up for the postponed fixture earlier in the season.

“We think on our day, we can beat any of the top sides, we certainly don’t fear them. We need everyone to play near to their best as an individual and as a team,” Mr O’Sullivan added.